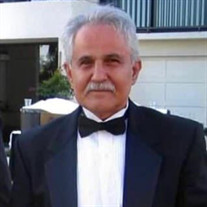 Ali Akbarpour was born on May 22, 1945 in Tehran, Iran and passed on Tuesday, January 5, 2021 in Newport Beach, California at the age of 75. Ali was born to Haji Akbarpour and Sona Nayebdadash and was the eldest of 8 children: Fereshteh, Pari, Roshanak, Bahman, Bahram, Sayeh, and Behdad. He moved to the United States in 1963 and later met the love of his life, Nellie Maria Washburn in Seattle, Washington. The two were married in 1970 and in the summer of 1973 they welcomed their first child, Roxanna Elaina, followed by Christopher Ali in 1975, and Sona Suzette in 1981. Ali worked in many different industries throughout his lifetime but most notably as a financial administrator at Rushmore Medical Center for over 20 years. He was then employed at Orange County Immune Institute for several years until his Multiple Sclerosis eventually prompted his retirement. Despite life challenges and his disability, he graced all with his optimism, work ethic and smile. Ali worked hard for his family, and even after his retirement he always found a way to provide for the people he loved. Ali is survived by his children Roxanna, Christopher, Suzette, his grandchildren Jasmine, Tatiyanna, Elijah, Artemisia, Raeden, Kalina, Brianna, Danica, and his great grandchildren Leyanna and Leila, who he loved so dearly. He is also survived by his Mother Sona, Uncle Essie, Aunt Farah and his seven siblings. He had many nieces, nephews and cousins who looked up to him and loved him as their own father. It’s hard to picture a world without Ali in it, because he was so important in the lives of many. He taught young people how to become strong and capable adults. He made people laugh even in the toughest times, he was a strong shoulder to lean on when things got hard, and he showed us how to enjoy the little things. Sometimes an ice cream cone, a juice, a mortadella sandwich, a piece of fruit, a joke, or a funny dance was all it took to make your day brighter, your heart fuller and your life sweeter. His enthusiasm for life always made you smile and feel connected. Those close to Ali knew the charismatic, generous, wise, and kind man he was. He was the true definition of a fighter, battling Multiple Sclerosis for over a decade. Ali’s contagious smile and live-life-to-the-fullest attitude will be missed by all. We will always have a piece of him in our hearts and minds forever. Ali will be greatly missed by a multitude of family and friends. Services will be held Thursday, January 14, 2021, 2:00 p.m. at Pacific View Memorial Park: 3500 Pacific View Drive, Corona del Mar, CA 92625 (Services are for immediate family only)

Ali Akbarpour was born on May 22, 1945 in Tehran, Iran and passed on Tuesday, January 5, 2021 in Newport Beach, California at the age of 75. Ali was born to Haji Akbarpour and Sona Nayebdadash and was the eldest of 8 children: Fereshteh, Pari,... View Obituary & Service Information

The family of Ali Akbarpour created this Life Tributes page to make it easy to share your memories.

Send flowers to the Akbarpour family.