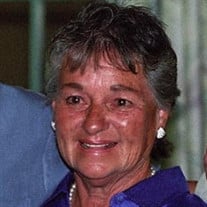 Anita (Ana) Herrera, 82 years old, of Torrance, California, passed away peacefully on May 28, 2021, with her family by her side. She was preceded in death by her husband Jesus Herrera. Anita was born to Pedro and Sylvia Huerta on November 2, 1938, in Inglewood, California. While working at Mattel toy company, she was introduced by friends to Jesus Herrera. They were married on January 28, 1961, moved to Hawthorne, and then to Torrance where they spent most of their life together. While raising her five children, she was an active member of St. Lawrence Martyr Catholic Church and School. There she had a steady presence on the playground and was known affectionately as the “yard duty lady.” She loved to take her walks around the neighborhood and would often stop to chat with neighbors. Another passion of hers was entertaining family and friends. She was a great host, constantly bringing people together, and her home was always open. As a result, Anita’s house was full of life, brimming with laughter and an ever-present throng of kids. Famous for her chicken mole and chorizo and eggs, Anita welcomed anyone who stopped by. She always had enough for one more, and if someone needed a place to stay, she would cheerfully say, “I have plenty of floorspace!” Anita’s greatest loves were her children and grandchildren -- and the Dodgers. She had a twinkle in her eye, a sweet, infectious smile, and will always be remembered for her kindness, warm generosity, and great sense of humor. She is survived by her five children Alisa Campbell (Rod), Orlando Herrera (Kathy), Jesse Herrera (Soyfa), Barbara Herrera, and Christopher Herrera (Samantha), her thirteen grandchildren, and her seven brothers and sisters. Family and friends are invited to attend the funeral service to be held at 10 am on Thursday, June 24, 2021, at St. Lawrence Martyr Church, 1900 S. Prospect Avenue, Redondo Beach, California. Following the service, a short graveside ceremony will be held at 1 pm, at Holy Cross Cemetery, 5835 West Slauson Avenue in Culver City. In lieu of flowers, please consider a donation to the American Diabetes Association on her behalf.

Anita (Ana) Herrera, 82 years old, of Torrance, California, passed away peacefully on May 28, 2021, with her family by her side. She was preceded in death by her husband Jesus Herrera. Anita was born to Pedro and Sylvia Huerta on November 2,... View Obituary & Service Information

The family of Anita Herrera created this Life Tributes page to make it easy to share your memories.

Send flowers to the Herrera family.