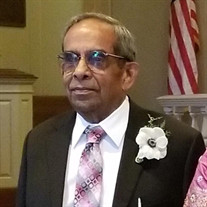 Bhoopalam Prabhakar-It is with deep sorrow and much love that we announce that Bhoopalam Prabhakar (BP), 86, passed away on February 13, 2021. He is survived by his wife of 61 years, Nethravathi Prabhakar (nee Kolla), his children, Parvathi Shalov (Seth), Renuka Prabhakar, and Nanda Prabhakar. Proud grandfather of Holden Shalov (Katherine), Jacob Shalov, and Samuel Shalov and loving great-grandfather of Elias Shalov. At the time of his death, Prabhakar (BP) lived in Laguna Woods, California. Prabhakar was born on October 24, 1934 in Haranhalli, Karnataka, India. He received an undergraduate degree from Bangalore College of Engineering and a master’s degree in Hydro-Electrical Engineering from University of Roorkee. In 1964 he travelled to the United States and earned his graduate degree in Structural Engineering from the University of Michigan. He then was joined by his wife and daughter in Muscatine, Iowa, where Prabhakar was employed by Stanley Engineering. In 1968, the family moved to Flushing, NY where he worked at Haines, Lundberg, and Wahler. He joined Ebasco Services in 1972, where he eventually retired from. The family moved from Flushing to Summit, NJ in 1973 where his two younger daughters were born. In 1983, the family moved to the West Coast. First moving to the Bellevue/Seattle area until 2004, then moving to San Diego County and finally residing in Laguna Woods. BP was always up to date on current events and interested in knowing what was going on in the world. He loved photography, both the actual taking of pictures and documenting his life, as well as researching new techniques and new equipment. Over the years, Prabhakar’s love of exploration took the family to many destinations, but he had a particular fondness of visiting both National and State Parks. Trips to Wildcat Den, Bear Mountain, Watchung Hills, Mt. Rainier and Torrey Pines were regular occurrences to name a few. For those of us who had the pleasure of having Prabhakar in our lives, we also know that he enjoyed his indulgences. Whether it was a bowl of butter pecan ice cream, a nice single-malt scotch, a good pair of shoes or a bespoke shirt, his life was full of little luxuries. Most will remember Prabhakar for his satirical sense of humor and boisterous laugh. He always brought joy and laughter to any gathering. Many will remember how Prabhakar was instrumental in helping them move and transition to the U.S. from India. His hospitality and generosity will be cherished by many. His passing leaves a huge hole in the lives of everyone that knew him. A giving and loving person, Prabhakar will be remembered for his quick wit and sage advice. A memorial service will be announced at a later date due to Covid concerns. In lieu of flowers please consider making a donation to https://vedanta.org/donate/

Bhoopalam Prabhakar-It is with deep sorrow and much love that we announce that Bhoopalam Prabhakar (BP), 86, passed away on February 13, 2021. He is survived by his wife of 61 years, Nethravathi Prabhakar (nee Kolla), his children, Parvathi... View Obituary & Service Information

The family of Bhoopalam S. Prabhakar created this Life Tributes page to make it easy to share your memories.

Bhoopalam Prabhakar-It is with deep sorrow and much love that...

Send flowers to the Prabhakar family.