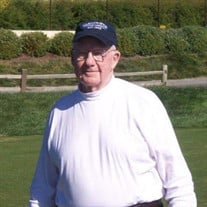 On August 29, 2021 in Laguna Woods, California, Bobby passed away quietly at his home at 96 years old. On January 21, 1925 in Olvey, Arkansas, Bobby Wayne Dodd was born. He was the ninth of ten children of Riley Boyd Dood and Louisa Victoria Williams who farmed in Arkansas and Oklahoma. Farm life gave Bob the opportunity to try almost anything, and he usually did. The Dodd's made hard work easier by the pranks they played and by finding humor in almost anything. A Golf course bordered the Dodd farm; as youth Bob began caddying and playing. Throughout his life he had enjoyed the challenge of playing different courses with his friends and family at every opportunity. On the football field of Broken Arrow High School, Bob's natural athleticism was refined. He made lifelong friends there and also met and marries Oneita Elizabeth Spencer. Bob Served in the US Navy during WWII; a curious choice for a farm boy who had never seen the ocean. He fought in the battles of Iwo Jima and Okinawa. Cruising alongside the USS Missouri, Bob witnessed the signing of the surrender treaty by the Japanese while he stood on the deck of the USS Talladega. Assigned to the Talladega throughout his naval service; it was the first ship that carried American troops into Tokyo's harbor following the surrender. Bob had enjoyed attending reunions of his shipmates from the Talladega. In 1952, Bob began a 33 yearlong career with Thompson Products, the forerunner of TRW. In 1964, Bob was transferred to TRW's Capistrano Test Site where he worked with a closely knit team that helped in America's " Race to Space" by developing and testing TRW's Lunar Module Descent Engine. Bob's Friends at TRW had continued to be a big part of his life since his retirement. Bob had also enjoyed being a member of the Masonic Lodge and had been a Shriner for many years. Bob's life has been rich with friendships, work and recreation; the greatest joy in life had been derived from a very special friend his family. Through an introduction made by a fellow employee of TRW, Bob made an enduring friendship with Arlene Wilson; they have enjoyed each other and enriched their lives for almost 45 years. Bob has three children, Bivian, Stan and Ken, who appreciated having their father involved in their families. Bob has always been a force that united extended family. He made an effort to stay in touch and visit family members; he enjoyed attending family events and reunions. He loved taking pictures and sharing them with everyone! When it came to being a grandfather, Bob exceled! He always had time to be with his grandchildren and learned what was important to them. Each of Bob’s five grandchildren & four great grandchildren, could not say his name without smiling; they shared important things in their lives with him and would go out of their way just to be with him.

On August 29, 2021 in Laguna Woods, California, Bobby passed away quietly at his home at 96 years old. On January 21, 1925 in Olvey, Arkansas, Bobby Wayne Dodd was born. He was the ninth of ten children of Riley Boyd Dood and Louisa Victoria... View Obituary & Service Information

The family of Bobby Wayne Dodd created this Life Tributes page to make it easy to share your memories.

Send flowers to the Dodd family.