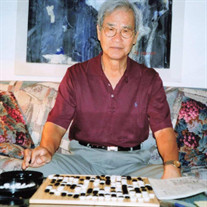 Chaiman Kim, born February 2nd, 1929 in Hyesan, North Korea, passed peacefully on Sunday afternoon, August 1st, 2021 in his Laguna Woods home. Born to Kyung Jong Kim (father) and Sun Ok Lee (mother), he has 1 older brother Chai Ee (passed), 2 older sisters Youngmai (passed), Charan (passed), 1 younger sister Aisun (Alice). From 1958, he attended Korea (Koryo) University in Seoul and in 1962, he moved to the US to attend the University of Minnesota for his Master of Social Work. In 1964, he moved to New York, where he met his wife and after a short courtship in Chicago, they were married in 1967 at the Korean Church and Institute of New York (was an elder from 1972) and had one child Stanley in 1971. After finishing university, he worked for the American Korean Foundation helping orphans and Korean students to apply overseas for college in the US. Given his English fluency, he worked as a translator at the Ambassador Hotel and tutored students in English. After his masters, he worked for the New York City Mayor’s Office (under Mayor Lyndsey) for 33 years as a youth administrator covering Bronx. Chaiman is survived by his loving wife Haesook, son Stanley, daughter-in-law Jeehyon and grandchildren Brandon and Claudia (Coco). Chaiman’s greatest joy was playing Go (nearly pro-level) for more than 60 years but was also passionate about sports (soccer, tennis, golf, gymnastics, speed-skating and judo), the arts (opera/classical music, paintings, old movies, philosophy/literature), learning other languages (Japanese, French) traveling and nature (>40 countries), spending time with his close friends and grandchildren, and taking his son to many chess competitions all over the US and soccer matches. The memorial service will be held on Monday, Aug 9th, 2021, 11:00 a.m. at the New Life Korean Church on 15 Goddard in Irvine, California. Family prefers plants or orchids to be sent to the Residence: Haesook Kim 3280 San Amadeo Unit N Laguna Woods, Ca 92637

The family of Chaiman Kim created this Life Tributes page to make it easy to share your memories.

Send flowers to the Kim family.