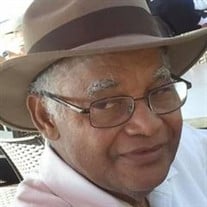 On Saturday, February 6, 2021, Charles Littleton Lloyd of Los Angeles, California loving husband and father escaped this earthly realm at the age of 78. "Letty” as he was affectionately called was born on May 17, 1942, in St. Johns, Antigua to Charles and Theresa Lloyd. After migrating to England at the age of 17 he began his education and career as an Engineers Apprentice. Upon moving to California in the 1970's, Letty obtained his general contractors license and began his own construction company, Charles L. Lloyd Construction which he owned and operated for over 40 years. He was a bible scholar and would often spend hours upon hours talking about biblical stories or reading his favorite scriptures, chapters and verses to his family. He also enjoyed singing and listening to old church hymns. His love of the Almighty God, the church and his brethren, was the essence of who he was. He was wise beyond his education and people of all ages and stations in life sought his advice and benefited from his counsel. Letty is survived by his wife Aliena Camella of 55 years, his three daughters Naomi Brooks(Joe) of Marble Falls, Texas, Pamella Lloyd, and Lorna Lloyd of Los Angeles, California; and son Charles Lloyd Jr. of Los Angeles, California. His three grandsons Javon, Devon, and Kejahn, and granddaughter Kaitlyn, who was the apple of his eye. He is further survived by his four siblings Henry Lloyd of Beverly Hills, California, Carmelita Petty of St. Thomas USVI, Naomi Coker (Cecil) of St. Croix, USVI, and Bernadine Lloyd of St. Thomas USVI; sister-in-law’s Germine James and Audrey Perry of Antigua, Lorna Joseph, and Christina Barnes of New York and Melanie Joseph of Pennsylvania and many nieces, nephews, and dear friends. He was preceded in death by his parents, Charles and Theresa Lloyd, four siblings; his twin Edward, brothers Lionel and Rufor and sister Evelyn; his son Keithroy and a host of ancestors who came to greet him and welcome him home at the gate of heaven. Services will be held March 22, 2021, 11:00 AM McCormick & Son Mortuaries 25000 Moulton Parkway Laguna Hills, California 92637 Interment at 3:00 PM Rose Hills Memorial Park - Garden of Passage 3888 Workman Mill Road Whittier, California 90601

On Saturday, February 6, 2021, Charles Littleton Lloyd of Los Angeles, California loving husband and father escaped this earthly realm at the age of 78. "Letty&#8221; as he was affectionately called was born on May 17, 1942, in St. Johns, Antigua... View Obituary & Service Information

The family of Charles Littleton Lloyd created this Life Tributes page to make it easy to share your memories.

Send flowers to the Lloyd family.