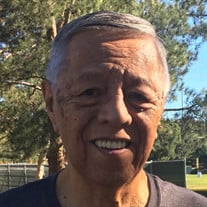 Clement Keawe Paalani, Jr, born July 18, 1944 in Honolulu, Hawaii, passed peacefully on Wednesday, September 8, 2021 in Mission Viejo, CA. Clem was lovingly cared for by his wife Kathryn Paalani and was surrounded by his children, Christian and Jennifer Bonte, Michael and Adrianna Paalani, his grandchildren, Zachary and Amy Bonte, Kaleinani Bonte and Keala Bonte. Born to Clement Keawe Paalani Sr and Orelia Wong Paalani, he has one sister, Joanne Maile Paalani. Clem was raised in Honolulu, Hawaii surrounded by his grandparents, aunties, uncles and many cousins. He attended Cathedral Catholic School for grade school and Maryknoll High School where he graduated in the class of 1962. After high school, he relocated to California where he attended Pasadena City College and then went into the army. He was stationed at Fort Sill, Oklahoma, where he was an instructor training soldiers in artillery. Upon discharge, he completed his degree in Computer Systems at Cal Poly Pomona. He went on to have a successful career working at various companies including, Wynn Oil Co, Walter Carpet Mills, Williams, Wright and Associates, and Fashion Institute of Design and Merchandising in Los Angeles. Clem enjoyed many hobbies throughout his lifetime. He fell in love with basketball at a very young age. He competed throughout his childhood and continued to be involved with the game as an avid spectator throughout his life. He closely followed his beloved Lakers and could recite their stats from any decade. In his twenties and thirties, he enjoyed roller speed skating and roller hockey as well as playing tennis. He would eventually find a love of country music, and he began clogging on a performance team, the Flatland Cloggers. He continued to enjoy watching competitive sports of all kinds, especially watching his children and grandchildren compete. He was introduced to his future wife, Kathy, by one of his speed skating friends, Kathy’s brother, Brad. Clem and Kathy married on April 28, 1973 and renewed their vows on November 18, 2011. They resided throughout southern California during their marriage. Clem enjoyed returning home to the Hawaiian islands and staying in contact with his many family members. He loved being with people and socializing. Clem’s greatest joy in life was spending time with Kathy, visiting with his kids and grandkids, “talking sports” with Mike, Christian, and Zack, playing cards with Kalei and Ke’ala and just being a part of his family’s lives.

The family of Clement K. Paalani Jr. created this Life Tributes page to make it easy to share your memories.

Send flowers to the Paalani family.