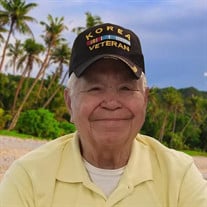 Cristobal Acosta Camacho, born July 8, 1935, in Apotgan, Guam, passed peacefully at home on Saturday, January 9, 2021 surrounded by his family. Cristobal was affectionately known as “Bobac”. Born to Manuel Manibusan Camacho and Antonia Acosta, he had 5 siblings and 14 half-siblings. When he was an infant he went to live with his paternal aunt, Pilar Camacho Lujan and her husband, Manuel Maria Lujan, who raised him as their own. Cristobal married the love of his life Trinidad San Nicholas Paulino Camacho on February 10, 1956 and celebrated 64 years of marriage just last year before she passed in October 2020. They have 4 children - Antoinette, Melva, Roy and Paul, plus 11 grandchildren and 10 great-grandchildren. In 1952, although he was under age at the time, Cristobal enlisted in the United States Army and was sent off to fight in the Korean War in 1953. He was wounded during the war and received numerous awards for his bravery and heroism. Cristobal was decorated with: ● Purple Heart ● Combat Infantryman Badge ● The Korean Service medal with two bronze service stars. ● United Nations Service medal ● National Defense Service medal ● The Presidential Unit Citation, “awarded to units of the armed forces of the United States for extraordinary heroism in action against an armed enemy.” ● Republic of Korea Presidential Unit Citation with Army Frame Cristobal was a hero to his country and to his family. He was even a recreational boxer before he enlisted in the United States Army. He was very successful in providing for his family and constantly taught them the values of hard work, a strong faith in God and an unceasing sense of humor. Cristobal enjoyed football and baseball and he loved being an umpire for the Little League teams back on Guam. His favorite sport teams were the Seattle Mariners, the Seattle Seahawks and any team his children, grandchildren, and great-grandchildren played in. Cristobal also loved spearfishing, playing poker, and getting people to laugh, especially his children. Cristobal was a devout Catholic who believed in the grace of God and enjoyed praying the rosary with his wife. He will always be remembered for his open and generous heart always ready to help family and friends in need. Cristobal inspired his family with his courageous spirit, his faith in God and his loving devotion to his wife and children. Cristobal’s family is hosting a daily rosary Zoom meeting every evening at 6pm through January 17, 2021. All are welcome to attend. Join Zoom Meeting https://us02web.zoom.us/j/9588560941 Meeting ID: 958 856 0941 Funeral Services are scheduled for Thursday, January 21, 2021 at Santiago de Compostela Catholic Church, 21682 Lake Forest Drive, Lake Forest, CA 92630. 8:00 am - Rosary 8:30 am - Funeral Mass 11:30 am - Burial Service at Miramar National Cemetery in La Jolla, CA Lunch will be provided after the burial service. Please RSVP to Chrissy Jones at (949)463-4243. In lieu of flowers the family suggests making a donation in honor of Cristobal Camacho to your favorite Veterans charitable organization.

The family of Cristobal Acosta Camacho created this Life Tributes page to make it easy to share your memories.