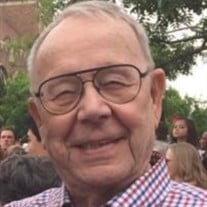 Daniel Slattery McDonald “Danny” passed away on November 29, 2021, in Pasadena, CA. He was born to Sara Slattery and John Kenneth McDonald on February 10, 1930, in Minneapolis, MN. He spent his formative years in Mandan, ND before moving to Glendale, CA with his family in 1937. Danny attended Glendale High School, where he was Senior Class President, graduating in 1948. In 1953, he graduated from the University of Southern California with a B.A. degree in Political Science. He was a member of the Kappa Sigma fraternity. After graduation, Danny served in the United States Navy as a Lieutenant on the U.S.S. Boxer. Upon returning home in 1955, Danny married Patricia “Patti” Wright whom he had met at USC. Danny continued his education and earned his Juris Doctor degree from Southwestern Law School. In 1961, he was admitted to the California State Bar. Danny had a long career as a Corporate Lawyer in the Savings and Loan industry before eventually going into private practice. Danny and Patti settled in Manhattan Beach, where they lived for 45 years and raised their family of four children. They were married for 59 years. Danny was an optimist, had a zest for life and a love for his family. He had a wonderful sense of humor, enjoyed USC football, college basketball and, most of all, his eleven grandchildren. Daniel was predeceased by his wife, Patricia Wright McDonald and his brother, Charles Michael McDonald. He is survived by his four children Tracy McDonald Phillips (Tom), Kelly McDonald Rouse (John), Kevin McDonald (Kristy) and Sean McDonald (Shannon). He is also survived by his eleven grandchildren Katherine and Spencer Rouse; Carson and Dalton Phillips; Troy, Lauren, Molly, Shannon and Bridget McDonald; and Patrick and Claire McDonald. A funeral mass will be held at American Martyrs Church, 624 15th Street Manhattan Beach on Wednesday, December 29, 2021, at 10am.

Daniel Slattery McDonald &#8220;Danny&#8221; passed away on November 29, 2021, in Pasadena, CA. He was born to Sara Slattery and John Kenneth McDonald on February 10, 1930, in Minneapolis, MN. He spent his formative years in Mandan, ND before... View Obituary & Service Information

The family of Daniel Slattery McDonald created this Life Tributes page to make it easy to share your memories.

Send flowers to the McDonald family.