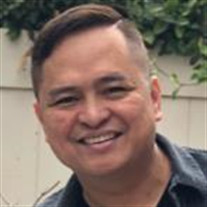 Danilo (Danny) Silverio Juat, age 51, went to join the choir of heavenly angels on January 29th, 2021 at Kaiser Permanente in Irvine, CA. He was born on July 4th, 1969 in Bulacan, Philippines to Fernando and Corazon Juat. He received his Bachelor’s in Nursing in 1990 from Mary Johnston College of Nursing in Tondo, Manila. He married Noemi Joaquin Juat on April 1st, 1993 in Manila, Philippines. Danny was known by many to be a powerful and impassioned singer. He had been an active member of the Papuri Singers since the 1990’s and composed a song called, “Patuloy na Aawit” for the Ika-Apat na Salmo album. He also recorded several worship albums including ‘Til the End of Time by Crossover band and Thank you, It’s Another Day with his original compositions entitled, “Laging Nandyan” and “Sana Muli”. He was the worship team leader at Faith Family Worship Center, Chicago, IL from 1997 to 2003 and the youth pastor at In the Presence of Jesus Ministries from 2004 to 2009. He planted Joy Church in 2015 and was in the process of obtaining his Master of Arts in Theology at Fuller Theological Seminary. He was also an energetic worship leader at Vineyard Church, Cincinnati, OH and Saddleback Church, Lake Forest, CA. Danny thoroughly enjoyed his work as a case manager at Kaiser Permanente and was loved by all his coworkers for his humor and charm. He will be remembered for his expressive singing, corny “dad” jokes, powerful testimony, tireless mentorship, overwhelming generosity, and genuine smile. He is preceded in death by his mother, Corazon Juat, his brother, Fernando Juat, Jr. and his son, David Juat. Danny’s memory is kept alive by his college sweetheart and wife, Noemi; his four children, Damie, Daniel, Darlene, and Dana; his father Fernando Juat and his sisters, Annalie, Gierly, and Heizel Juat. Public viewing will be on Saturday, February 20th, 2021 between 2-4pm PST followed by a service celebrating Danny’s life at 4pm PST. Due to pandemic restrictions, the service is by invite only, however, it will also be available virtually via Zoom and Facebook live. “In lieu of food or flowers, we would like to politely request that your generosity come in the form of financial gifts to help support the family during this difficult time.” On behalf of the Juat family, thank you everyone for your love and prayers. My flesh and my heart may fail but God is the strength of my heart and my portion forever. Psalm 73:26

Danilo (Danny) Silverio Juat, age 51, went to join the choir of heavenly angels on January 29th, 2021 at Kaiser Permanente in Irvine, CA. He was born on July 4th, 1969 in Bulacan, Philippines to Fernando and Corazon Juat. He received his Bachelor&#8217;s... View Obituary & Service Information

The family of Danilo Juat created this Life Tributes page to make it easy to share your memories.

Send flowers to the Juat family.