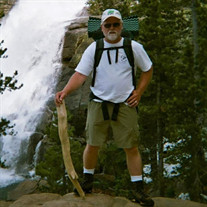 David Roy Williams, was born on February 17, 1959, in Covina California, passed away on Tuesday, January 5, 2021, he was 61. David was born to Richard and Ruth Williams. He grew up with his sister Kim, his brother John, along with Grandparents, Aunts, Uncles and Cousins, in Baldwin Park, California. David worked for Northrop Grumman, a Company that designs, develops, builds and supports some of the world’s most advanced products. He worked on multiple Programs including the F/A-18 Hornet, B-2 Stealth Bomber, and F-35 Lightning II during his 36 year career as an Engineer. In 1999 while working at Northrop, David met the love of his life Lisa. After a short courtship, David and Lisa were married in May 2000 in Pienza, Italy. David’s greatest pleasure in life was the years with Lisa, and their dogs, Bella and Barin. David loved time spent with family and friends, traveling, cooking and relishing the good things in life. Enjoying backpacking trips in Yosemite and many camping trips with Lisa and friends. David took great pleasure in sailing the French Polynesia Society Islands, British Virgin Islands, and Cyclades Islands in Greece with his wife and close friends. David had a passion for gardening, he loved digging in the dirt, growing veggies and fruits, beautiful flowers and living plants. David and Lisa’s shared love for travel and to see new places, experience new things and adventures, led to lasting memories. David was preceded in death by his father Richard Ronald Williams, his mother Ruth Elizabeth (Hibbs) Williams, and his sister Kim (Williams) Nicholas. David is survived by his beloved wife Lisa Verdi Williams of Costa Mesa, CA and brother, John Steven Williams of Lawrence, KS. David is also survived by his Mother-in-law Joan Verdi of Fullerton, CA, Sister-in-law, Debra (Verdi) Munoz of Reno, NV, Sister-in-law, Laura Verdi of Brea, CA, Brother-in-law John Verdi and wife, Becki Verdi of Downey, CA, and Nephews and Nieces. David will be greatly missed, and he will eternally be in our hearts and memories forever.

David Roy Williams, was born on February 17, 1959, in Covina California, passed away on Tuesday, January 5, 2021, he was 61. David was born to Richard and Ruth Williams. He grew up with his sister Kim, his brother John, along with Grandparents,... View Obituary & Service Information

The family of David Roy Williams created this Life Tributes page to make it easy to share your memories.