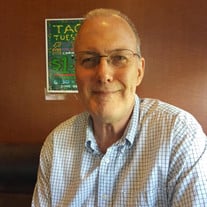 Dennis Lee Meek, son to the late Martha and Les Meek, was born January 28, 1953 in Long Beach, California. He had an active and action-filled childhood in the Meek family home shared with his older siblings Kathy and David and their dog, Lady. Dennis attended all levels of public school in Long Beach and completed several courses at Long Beach Community College. He was recruited away from college by an irresistible job offer to work for Hewlett Packard Lawndale, California. There, he eventually met the love of his life, Pamela, who worked in Human Resources at the same office location. He always said that, for him, it was love at first sight and he often recalled working tirelessly to earn her affection. Dennis and Pam were betrothed in a modest and intimate ceremony before family and friends in his sister Kathy’s home in Fullerton, California, on November 13, 1983. The two were married 5 years before having their first daughter, Michelle in 1988 and their second daughter, Alanna, in 1989. They lovingly raised their children together in Lake Forest, California. Dennis was the most dedicated and supportive partner and father that anyone could ask for; never hesitating to be present (and often video recording) any dance recital, music concert, art show, or event his daughters were involved in. He often placed other’s accomplishments and activities above his own needs and desires and sacrificed greatly to ensure the health and happiness of his family. He loved his wife and daughters beyond words and sincerely lended support in every one of life’s highs and lows. Dennis spent much of his time caring for his parents as they aged and postponed travel and extended trips to ensure he stayed close and was available for their every need. He was a selfless and dedicated son, father, and partner. He will be remembered for his ability to keep his composure and being strong during the most difficult of situations. Some of Dennis’ deepest passions, aside from quality family time, included woodworking and crafting, photography, basketball, body surfing, nature and the outdoors, beer and pizza, movies, puzzles, games, music, and “Dad jokes”. He loved to make others smile and laugh and was often told he was not serious enough at times. He was quick witted and an intelligent problem solver of everything from broken barbies to computers to car engines. In his lifetime, he took on many large projects and was successful with nearly everything he attempted. Dennis was a kind soul loved dearly by all, and his warm ‘bear hugs’ will be sorely missed. He is survived by: his wife Pamela, his daughters Michelle and Alanna, his brother Dave and his wife Colleen, his sister Kathy and her family, his grandsons Luke and Blake, and his grandpup Tyrion. Dennis was reunited into the heavenly loving arms of his late parents on December 3rd, 2021 and laid to rest at El Toro cemetery. To celebrate Dennis’ life and to keep his memory, the family requests that, in lieu of flowers, to please plant a tree and eat your favorite pizza and embrace life to its fullest as he did.

Dennis Lee Meek, son to the late Martha and Les Meek, was born January 28, 1953 in Long Beach, California. He had an active and action-filled childhood in the Meek family home shared with his older siblings Kathy and David and their dog, Lady.... View Obituary & Service Information

The family of Dennis Lee Meek created this Life Tributes page to make it easy to share your memories.

Dennis Lee Meek, son to the late Martha and Les Meek, was born...

Send flowers to the Meek family.