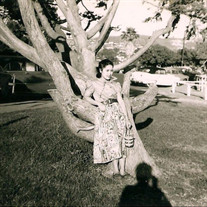 A resident of Laguna Beach since the early 1950s, Dionisia Taray Cabang, age 93, died January 1, 2022 at Mission Hospital in Laguna Beach. Known and beloved by many as “Dioni,” Dionisia was born October 8, 1928 in the town of Candasig in Balilihan, Bohol, Philippines to Apolonio and Josefina Taray. A country girl who was raised with farming, animals and a family of 15 brothers and sisters, Dionisia was a dutiful daughter, avid churchgoer and hard-working student. While studying to become a schoolteacher, her life changed when Francis Cabang, a fellow Filipino who had become an established businessman in the United States, traveled back to his home country to find a wife. Seeing Dionisia at a village dance, he fell in love with the beautiful young woman he would soon marry in 1952. Following her relocation to a new life as an American citizen, Dioni’s considerable skills with accounting and organization were instrumental in growing the Cabangs’ various business ventures, most notably the Royal Hawaiian Charcoal Broiler, a popular restaurant and Laguna Beach landmark that remained in the family from its opening by Francis in 1947 until its change of ownership in 2006. The pair raised four children, and Dioni embraced the many responsibilities of family life, business management and her longtime devotion to the Catholic faith, attending St. Catherine’s for mass and other religious services regularly. She also found time to enjoy an eclectic range of diversions, from the lilting music of Celtic Thunder and Irish tenor Paul Byrom to the smackdown boisterousness of WWE professional wrestling. Through it all, Dioni was widely admired for her grace, kindness and strength. When the Cabangs’ original home was lost in the Laguna Beach fire of 1993, countless friends and fellow Laguna residents were quick to provide lodging, support and supplies to their longtime Filipina sweetheart and her family. And until his passing in 2003, Dioni tended to Francis’s care and well-being throughout his later years with tireless dedication while maintaining her household and ongoing business commitments. She is survived by daughters Marilyn Pannell and Julie Loizides, son Rufino (Peter Pergelides), grandson Christian Pannell, granddaughter Louiza Guild (Greg Guild), great-grandson Basil Pannell, great-granddaughter Dionisia Pannell; and nieces Linda Hudson, Rosalia Haggard, Flaviana Lawson and Erlita Mascarinas. Son Francis Cabang Jr. passed away in 2019. A Mass of Christian Burial will be held on Thursday, January 20, 11 a.m. at St. Catherine of Siena Catholic Church, where she took great comfort and pride as a decades-long parishioner. The church is located at 1042 Temple Terrace in Laguna Beach. A private interment will follow. Please RSVP for reception at Asia Buffet Immediately following Mass. Mrs. Cabang’s Funeral Time: Jan 20, 2022 11:00 AM Pacific Time (US and Canada) Join Zoom Meeting https://us02web.zoom.us/j/87049803017 Meeting ID: 870 4980 3017 One tap mobile +16699006833,,87049803017# US (San Jose) +13462487799,,87049803017# US (Houston) Dial by your location +1 669 900 6833 US (San Jose) +1 346 248 7799 US (Houston) +1 253 215 8782 US (Tacoma) +1 312 626 6799 US (Chicago) +1 929 205 6099 US (New York) +1 301 715 8592 US (Washington DC) Meeting ID: 870 4980 3017 Find your local number: https://us02web.zoom.us/u/kbMR17R0Bl

The family of Dionisia Taray Cabang created this Life Tributes page to make it easy to share your memories.

A resident of Laguna Beach since the early 1950s, Dionisia Taray...

Send flowers to the Cabang family.