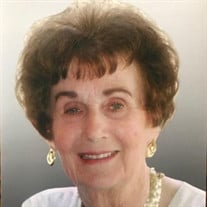 Doris Mae Sonntag, born April 10, 1929 in Youngstown, Ohio passed away on Sunday, January 24, 2021 in Lake Forest, California. She was 91 years old. She is survived by her loving and devoted husband of 15 years, Lester Francis Sonntag. She is also survived by her son Charles J. Vaughn Jr.(wife Deanette), daughter Linda Sorrell (husband Paul) and son Carl James Vaughn (wife Patsy). Doris was blessed with six Grandchildren and seven Great Grandchildren. Doris was predeceased by husband Matthew Horneck in 2004 and by former husband Charles Vaughn Sr. in 2014. She was also predeceased by her brother Dick Rook and sister Jean Davies. Doris was born and raised in Youngstown, Ohio to her parents Carl and Carlotta Rook. Doris held her very fondest childhood memories close to her heart of times spent with her parents at Geneva on the Lake, Lake Erie, Ohio. Doris was married to Charles Vaughn Sr. on 12-15-1951. After a few years of marriage, they moved their young family to California. After 19 years of marriage, they divorced. Doris raised her three children in Rowland Heights, Calif. She married Matthew J. Horneck on 6-14-1975. Doris and Matt later moved to Casta Del Sol in Mission Viejo, Calif. in 1984. During this time Doris and Matt enjoyed many RV trips, cruises, and trips to Europe. They were blessed with six Grandchildren to enjoy entertaining at their home and at Mission Viejo Lake. Matt passed away Nov. 2004. A short time after, Doris and Lester, who had known each other for many years from their RV club, realized that they would make a wonderful couple and decided to get married in Oct. 2005. Doris and Les shared many adventures via RV travels and cruising. Doris and Les moved to Freedom Village Senior Community in Lake Forest in 2014. Despite Doris's on going and ever progressing dementia while they lived at Freedom Village, they were able to enjoy each other's company, friendship and travels due to Les' love and devotion to his "Dorie". Doris loved to walk, whether it was in her beloved neighborhood at Casta Del Sol, local beaches, parks or on trips. During her 91 year walk through life, she derived her greatest pleasure from time spent with her family. A private family memorial will be held on Tuesday, March 2, 2021 at 11:00am, at McCormick's and Sons Mortuary in Laguna Hills. Graveside burial to immediately follow at El Toro Memorial Park in Lake Forest.

Doris Mae Sonntag, born April 10, 1929 in Youngstown, Ohio passed away on Sunday, January 24, 2021 in Lake Forest, California. She was 91 years old. She is survived by her loving and devoted husband of 15 years, Lester Francis Sonntag.... View Obituary & Service Information

The family of Doris Mae Sonntag created this Life Tributes page to make it easy to share your memories.

Send flowers to the Sonntag family.