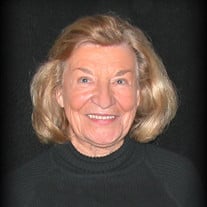 Dorothy “Dot” Dougher, age 95, passed away peacefully on February 10, 2021 at her home in Laguna Beach, California. The eldest of three sisters, she was born September 26, 1925 in Detroit, Michigan, to Anne and Michael Matrack. She was married to Gerard “Jake” Dougher for 50 years until his death in 2000. Dorothy was the proud mother of three devoted children and their spouses: Gerry Jr, (Mary Dougher-Foster), Debi (Tom Pavlik) and Brian (Jaculin). Nothing brought her more joy than being “Grandma Dippy” to her nine grandchildren; Lindsay, Whitney, Chelsea and Dane Pavlik; Brianna and Michael Dougher; Elijah, Flora and Isabella Dougher. She was additionally thrilled to have known her six great-grandchildren: Addison and Grayson, Juliet and Mirabel, Dolly and Hank. In addition to her husband and parents, Dorothy was predeceased by her son, Gerry Jr. in 1997, and her sister, Ruth Weislo. She is survived by another sister, Joyce Dyer, and numerous cherished nieces and nephews. Dorothy graduated from Detroit’s High School of Commerce where she excelled in advanced secretarial skills, played on the basketball team and performed the lead in the senior play. She attended Wayne State University and worked as a model and then was an executive secretary at the Ford Motor Company. She was also a fabulous seamstress and created stunning wardrobes. Determined and focused, Dot eventually advanced to become Women’s Editor of the Ford Times magazine where she also caught the eye of her future husband, Gerry (Jake), whom she married in 1949. In addition to being a stay-at-home mom, Dorothy coordinated multiple real estate endeavors, including construction, while Jake continued to advance through the ranks of the Ford Motor Company. Eventually the family moved to Louisville, KY. and in 1974, after Jake’s early retirement, moved to Laguna Beach, California to devote themselves to their new business; owning and operating Mobile home Parks. The two of them thrived in their new venture and by the mid 80’s had grown the business to 13 mobile home parks in Orange County. All of the family was involved in the operation of the business for many years. Dot was strong, healthy, and tenacious and continued driving and working until the age of 90. When not working, Dorothy enjoyed playing tennis which she didn’t give up until the age of 84, when a knee replacement sidelined her. She also had a passion for travel and visited dozens of countries with family members, making fabulous memories for them all. Dorothy also had a penchant for snazzy cars, jewelry, a great Chardonnay, Lay’s potato chips, doughnuts, duplicating the Food Network’s creations and enthusiastically sharing her grandchildren’s lives with sporting events, plays, school, philanthropic events, hours of card playing, nightly episodes of “Jeopardy” and laughing until she cried. Dorothy was a devout Catholic; a private family funeral will take place in late February at St. Catherine of Siena Catholic Church in Laguna Beach, CA. with Internment at Ascension Cemetery in Lake Forest, CA. where she will join her husband and son. In lieu of flowers please consider donating in Dorothy’s memory to Adopt a Center – Operation Illumination https://4us.org/adopt-a-center or Mater Dei High School www.materdei.org/giving

The family of Dorothy Anne Dougher created this Life Tributes page to make it easy to share your memories.

Send flowers to the Dougher family.