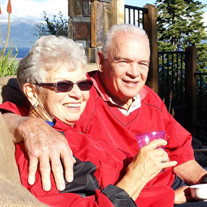 Laguna Woods, CA - Douglas Archibald Bruce died peacefully in his sleep on Saturday, January 29th at a Laguna Woods Hospital following a battle with blood cancer. Born September 14, 1934 in Wyandotte, Michigan, the son of Charles (Chick) of Dundee, Scotland and Louise of Michigan, he has three siblings Jean Swanson (passed), Robert and Nancy Bruce – the Michigan Bruce Clan. Surviving is his wife June (Loeckner), son Doug and wife Abbey (granddaughter Taylor), son Dave and wife Pam (grandsons Andrew and Alec), son Dean and wife Dianna (granddaughters Sydney and Lyndsey) his daughter Deanna and husband Dane (granddaughters Bonnie and Tessa, her husband Kevin and great-granddaughters Louise and Emma) and son Daryl and wife Jennifer (grand dog Bailey). Doug graduated from Wyandotte High School class of 1952. Following graduation, he became a “Sparty”, attending Michigan State University in the school of Engineering (Civil). Doug’s college adventures included membership in Alpha Tau Omega and club ice hockey. His love for MSU was memorialized daily in his email address from the AOL days… [email protected] …. as well as get togethers with the Brothers for 60+ years! Doug married his high school sweetheart June (Loeckner) right after college. The two were inseparable and he was able to win the hearts (and approval) of her parents, Frank and Lucy – no small feat. Junie was the love of his life for 74 years. Their relationship and devotion to each other was like none other and was an inspiration for the entire Bruce Clan. Doug was an accomplished Engineer and Project Leader getting his start with Miller Irrigation Contractors in Royal Oak, Michigan. He literally laid the groundwork for many a golf course, home, and subdivision across the midwest. Doug’s career included positions at Buckner, Johns-Manville, Laval Separators, and Febco. Doug was active in leadership of the ‘Irrigation Association’, a national industry society. Doug and June built their dream house on Hammond Lake in West Bloomfield, Michigan in the summer of 1967. For the next seven years, the lake house was the gathering place for Bruce Clan celebrations, including swimming, fishing, sailing, sledding and LOTS of ice hockey, to name a few. Career moves brought Doug and family to Fresno, California in 1974. The family spent many years in Fresno and Trout Lake homes making lifelong friends and enjoying the mountains, beaches and all California has to offer. Doug and June decided to return to the lake in Michigan to enjoy a few more years of summer golf, lake and friends, then ‘retired’ at Laguna Woods, California 5 years ago. Scottish traditions ran deep in Doug’s life. Nurtured by his father, Chick , the Michigan Bruce Clan flourished through extended family celebrations included kilts, golf, toasts and merry laughter. Doug and the Bruce Boys celebrated their September Birthdays 2012 in the Scottish Highlands, golfing, castling, whiskying and overall enjoying his Scottish heritage. A ‘Celebration of Life and Remembrance’ will be held Saturday, February 12, 2022, Noon at McCormick & Son Mortuaries 25002 Moulton Pkwy, Laguna Woods, CA followed by a reception. Douglas Archibald Bruce Obituary - Visitation & Funeral Information (mccormickandson.com) Doug will be laid to rest next to Charles and Louise in Michigan Memorial Cemetery in Flat Rock. The Bruce Clan is planning a ‘Celebration of Life and Remembrance’ service beginning at Michigan Memorial Cemetery in late March / early April and will reach out to family and friends with details. Slange Var 💚 Go Green!

The family of Douglas Archibald Bruce created this Life Tributes page to make it easy to share your memories.

Send flowers to the Bruce family.