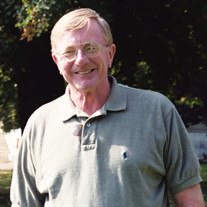 Edwin Quisenberry Wright, Jr., passed peacefully on Tuesday August 24th 2021 at the age of 84, after a long decline with dementia. Ed was a 10 year resident of the Laguna Woods community. Ed was born on April 3rd, 1937 in Baltimore MD, the only child of Edwin Quisenberry Wright and Anne Elizabeth Ritchie Wright. As a child, Ed enjoyed the family farm in Waynesboro VA and raised rabbits. His favorite pet was his bunny named Bugs. He always enjoyed the outdoors and loved to hike and camp. He hiked much of the Appalachian Trail throughout his early life. Ed graduated from Baltimore Polytech High School in 1954 and went on to study Forestry at West Virginia University. He later changed his major to math and physics and graduated WVU in 1960. After graduating, he served in the US Army for two years where he was assigned to nuclear systems research at Aberdeen Proving Grounds. After his discharge in 1962, he was recruited to work at General Dynamics in the nuclear systems department in Groton, CT. During Ed’s professional life, he worked for various corporations in management systems. He went on to receive his MBA from James Madison University in 1979. He also earned his CMA (Certified Management Accountant) in 1980. During his long career, he worked for General Dynamics/ITT, Celanese Corporation, Glaxo/Kline Pharmaceutical Company, Morton, ITT Telecom and the American Red Cross. After he retired, he became a volunteer mediator for the Orange County court system, a job he enjoyed for more than 10 years. Ed and Emmy met in 1954 while they were in college together at WVU. Ed had a part-time job at a service station where Emmy parked her car. They became friends, and they married 10 years later on August 28th, 1965. Ed always had a passion for cars, and before they were married, he owned several race cars. A talented mechanic, he worked on and restored his own vehicles. In his 30’s, he took up golf and enjoyed playing the rest of his life. Ed was an avid reader, and he had a passion for learning. He took many courses after he retired just because he was interested in the subject. Ed and Emmy welcomed their only child, Elizabeth, on April 23rd, 1973. Ed’s great joy was teaching Elizabeth throughout her childhood, most notably chess and golf. He also supported her musical studies, and he was a very enthusiastic singer, and would frequently accompany her practice sessions with ad lib vocal improvisations. As a family, they traveled all over the US and Europe. Favorite vacations included all of the National Parks. Ed and Emmy continued this tradition with the Mariner’s Church Senior’s Group, after they both retired. Throughout their marriage, they lived in Connecticut, Virginia, North Carolina and finally California. Ed always enjoyed nature, daily walks, bird watching and reading. Despite his significant decline, he knew Emmy and Elizabeth until the very end. He was always there to be supportive and loving and he will be deeply missed. Ed is survived by his wife of 56 years, Emmagene Mayle Wright, his daughter Elizabeth Lee Wright, maternal cousin Susan Ritchie Summers, two nephews, Paul and Mark Mayle and one niece Carol Jones, and several great-nieces and nephews. Ed was a great supporter of: Gogo Grandmothers https://gogograndmothers.com/mission-vision The American Red Cross https://www.redcross.org/donate/donation.html/

Edwin Quisenberry Wright, Jr., passed peacefully on Tuesday August 24th 2021 at the age of 84, after a long decline with dementia. Ed was a 10 year resident of the Laguna Woods community. Ed was born on April 3rd, 1937 in Baltimore MD, the... View Obituary & Service Information

The family of Edwin Quisenberry Wright Jr. created this Life Tributes page to make it easy to share your memories.

Send flowers to the Wright family.