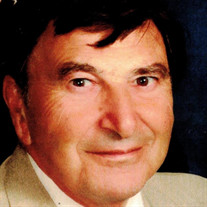 Businessman and lover of life, Elias Sami Nasrawi passed away peacefully in his home on June 6, 2021. He is survived by his wife, Jeann Nasrawi, two children, Sami Nasrawi and Lana Nasrawi Schmidt, and his granddaughter, Bella. The eldest son of six children, Elias was born in Salt, Jordan on November 26, 1931 to Sami and Mary Nasrawi. He played soccer and ran track at his school in Jerusalem, then later earned an accounting certificate at post secondary school. His first career was as a banker at Intra Bank, one of the largest financial institutions in Amman, Jordan during his time. But accounting life simply would not do for his adventurous and ever-growing soul. His love for the humanities inspired romanticism, as he enjoyed painting, music, and traveling-- and the creative sparks that fulfilled him most finally led him to the dream of all dreams: America. Upon arriving in the states in 1968, Elias took his first job as a line cook in New Jersey, and later as a carpet installer in Paterson. He met his wife, Jeann, in 1970 and they married a year later. Still dreaming of bigger and better for his young family, it was not long until he branched out and began his own business. In 1980 Elias purchased his first convenience store on the Golden Coast of California, where he would become the patriarch of a fun-loving extended, multigenerational family for the next three decades. In his life, he owned and managed five businesses, culminating in his final labor of love, Inwood Terrace Restaurant, where he fed hundreds of local business folk who, after ten years of patronage, would come to call him friend. He retired at the age of 78. Elias will be remembered for his dynamic sociability, his joie de vivre, and his warm sense of humor. His readiness to dance at haflis will be missed, and we may never taste hummus and tabouli quite like the kind his blessed hands made, but we can all be thankful that he was able to nourish us not just with wonderful food, but with his friendship and laughter. May his memory be eternal. Services will be held Wednesday, June 16, 2021, 10:00 a.m. at St. Mark Orthodox Church, 17840 Sky Park Circle, in Irvine, followed by burial at 12:00 p.m. at El Toro Memorial Park, 25751 Trabuco Road in Lake Forest. Reception will follow at St. Mark. In lieu of flowers, the family asks that donations be made to the Alzheimer’s Association at www.alz.org in the fight against Alzheimer’s disease.

Businessman and lover of life, Elias Sami Nasrawi passed away peacefully in his home on June 6, 2021. He is survived by his wife, Jeann Nasrawi, two children, Sami Nasrawi and Lana Nasrawi Schmidt, and his granddaughter, Bella. The eldest... View Obituary & Service Information

The family of Elias S. Nasrawi created this Life Tributes page to make it easy to share your memories.

Businessman and lover of life, Elias Sami Nasrawi passed away...