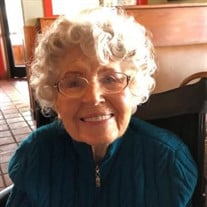 Elsie Marie Rydell has departed for a family reunion in heaven. No doubt her father, Paul Halberg, her mother Hilda Pearson Halberg, brother Herbert Halberg, her husband Allen G. Rydell, daughters Janet Luft Danford and Susan Rydell Buchanan and her son Gregg Allen Rydell were waiting to greet her. She kept them waiting a long time. Elsie was 106. Future gatherings will take place for daughter Robin Rydell Einbund and grandson Jeffrey A. Rydell. Elsie was born on July 4, 1915 in Chicago, Illinois and passed away peacefully on the morning of December 28, 2021 in Lake Forest, California of natural causes. Elsie’s parents were both from Sweden so Elsie and her brother were fluent in Swedish. In early childhood, they crossed the Atlantic aboard a steam liner for an extended visit with their Swedish relatives. Elsie grew up during the challenges of the Great Depression which honed her talent for creating elegance on a shoestring budget. On August 17, 1944, during World War II, she married Allen G. Rydell, a Marine stationed in the South Pacific. After the war, they settled on the south side of Chicago to raise their family. Elsie’s creativity and passionate work ethic knew no boundaries. She made her home beautiful by upholstering furniture, painting, making curtains and pillows. She also sewed wonderfully fashionable clothing for herself and the family and created beautiful gardens full of flowers and fruit. Animals always gravitated to her and they seemed to form a special bond. She loved classical music, good books and a good Manhattan. Elsie loved to entertain. She was a seemingly effortless hostess and home chef creating huge Christmas smorgasbords and elegant parties for many occasions. She had a lovely sense of humor which never left her. Later in life she and Allen traveled, most notably to the South Pacific where Allen was stationed in World War II, Thailand, Costa Rica, Canada, Europe including Germany and Sweden, where they visited family, and many domestic trips including Hawaii. They celebrated 54 years of marriage before Allen’s final journey at the age of 83. Several years later, Elsie relocated to Laguna Woods, California, close to her youngest daughter Robin. Her enthusiasm for life and people did not slow down. She participated in eight different clubs and had an active social life for the better part of 20 years. Elsie’s bright energy and warm smile will now grace our final dimension. In lieu of flowers, please send a donation to Best Friends Animal Society, 5001 Angel Canyon Road, Kanab, Utah 84741 bestfriends.org.

The family of Elsie M Rydell created this Life Tributes page to make it easy to share your memories.

Elsie Marie Rydell has departed for a family reunion in heaven....