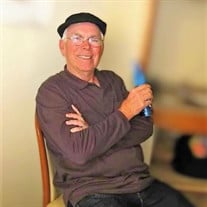 On July 13, 1941, In Warren, Ohio, Emil was born to Mary Joan Voishan and Emil Paul Radu. The family moved to California soon thereafter, where Emil would spend the greater part of his life. Emil graduated from Northrup University in 1963 with a degree in Aeronautical Engineering, and later earned his license as a civil engineer. He went to work on the first Apollo spacecraft at North American Aviation. This was his dream job at a time when space travel was an exciting national goal. Years later, he would proudly tell his kids that he worked on the spacecraft that went to the moon. He married Dorothy Hoover in 1964 and they moved to Orange County to start their family of three boys—Mike, Steve and Bob. Several career changes occurred during the next 45 years, including the opportunity to work for Hughes OffShore, on the design of the secret deep-sea drilling ship “Global Marine Explorer.” that was the CIA’s effort to recover the lost Soviet submarine K-129. Emil loved telling the story of how they designed the large claw without knowing its actual purpose. During his later years, he worked for an international oil drilling equipment manufacturer. The job would take him to deep sea oil platforms in the North Sea. Australia, Norway, and Scotland became his “office.” He is a named inventor of 4 patents His last career move came in 1987 when he was recruited to work for McDonnell Douglas/Boeing on the design and manufacturing of the C17, the largest military transport developed for the U.S. Airforce. Emil was immensely proud of being a part of this project and of being on hand for the C17 First Flight, highlighted by the dipping of wings—a symbol of respect to the workers below. Emil always had an interest in many different hobbies. In his 30’s, he earned a black belt in Shodokan Karate, then took up street biking and rode 30 miles every weekend. He loved skeet shooting and soon started loading his own ammunition. His biggest passion was sailing. He took lessons and bought a 21’ sailboat. Many Saturdays would find the whole family sailing the coast searching for whales. He loved wearing his captain hat and manning the tiller. In 2001, Emil retired AND THE FUN BEGAN…. He and Dorothy moved to a retirement community in Arizona where there was no shortage of activities and friends to enjoy them with. He took tennis lessons and learned pickleball. He and Dorothy played golf several times a week and he joined a men’s golf group “the dirty dozen!”. He truly loved his time in Arizona and the many friends he made. Emil was diagnosed with Lewy Body dementia and parkinsons over 10 years ago. Gradually it became more difficult to enjoy the activities he loved-- Golf games with Mike and Steve, weekly card games with Alice and Sandy, air shows with Bob, traveling, cruising. But, he always kept his sense of humor and he loved being with his family. We are so blessed that Emil became a grandfather just a few months before he passed. Until his last day, he loved hearing stories of Everly’s latest accomplishment. God was a major part of Emil’s life. He had strong faith and loved helping out in the church when he could. We are at peace because he’s with Steve and is no longer suffering. Emil is survived by his Wife, Dorothy; Son’s, Mike and Bob; Daughter in Law, Jennie; granddaughter, Everly; Sister-in-law and brother-in-law, Alice and Sandy Seidner; Niece, Sharon Driessen, and her husband, Andy, and their children Melanie, Kimberly, and Ryan; Nephew, David Seidner, and his wife Allison, and their son Robert. He will be missed by all. Private internment will be held Friday, Sept. 3rd, at El Toro Memorial Park.

On July 13, 1941, In Warren, Ohio, Emil was born to Mary Joan Voishan and Emil Paul Radu. The family moved to California soon thereafter, where Emil would spend the greater part of his life. Emil graduated from Northrup University in 1963 with... View Obituary & Service Information

The family of Emil John Radu created this Life Tributes page to make it easy to share your memories.

Send flowers to the Radu family.