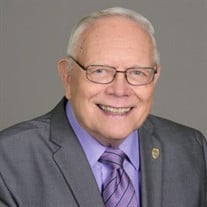 Pastor Floyd Edwin Westbrook peacefully passed from this world to the next at his home in Laguna Woods on May 5, 2021. Born in Electra, Texas to Hiram and Berneice Westbrook, he was beloved by his family and the congregations he pastored during his seventy years of ministry. After preaching his first sermon at age 16, Floyd Westbrook became a traveling evangelist, speaking in churches along the Southwest corridor between Texas and California. He pastored his first church at age 22, Southside Assemblies of God in Los Angeles (1952-55). A tiny church in Orange County called him in 1955. He accepted, recognizing the growth potential of the area. He built a thriving community at Christ Church of Westminster over two decades and founded Westminster Christian Schools. In 1977, Pastor Westbrook moved to Visalia, California. After successfully planting Grace Community Church of Visalia (1979), he began Visalia Christian Ministries, an interdenominational weekly “Bible and Breakfast” ministry to Seniors. During his twenty-five years there, Pastor Westbrook authored “Reading Through the Bible A Chapter A Day,” a daily devotional guide to encourage people to read through the Bible. He was active in civic affairs as a Rotary Club Paul Harris Fellow, and a Hospital and Hospice Chaplin. He, two other pastors and the Police chief, co-founded the Visalia Police Department Chaplaincy. Pastor Westbrook also ministered to the residents of each retirement home in the city regularly, and in his later years preached an average of two funerals each week. Westbrook Gallery, a tribute to his ministry, along with his extensive Hymnal and Songbook Collection reside at Vanguard University. Floyd Westbrook was Salutatorian of his Electra High School Class of 1947; graduated as Valedictorian in 1950 from Southwestern Bible College with a B.S. in Theology; and graduated with Honors from California State University at Long Beach with a B.A. in Education and a M.A. in Education Administration in 1972. Pastor Westbrook was preceded in death by his wife Atha in 1970 and wife Jeanette in 2017, and his daughter Sandra Davis in 1994. He is survived by his children Karen Moderow, Edwin Westbrook, Sharon Brookshire, Jo Ann Brookshire, Marty Burleson and 14 grandchildren and 22 great-grandchildren. Two Memorial Service will be held: Orange County: Tuesday, May 25, 2021 11:30 A.M at South Shores Church, 32712 Crown Valley Parkway, Dana Point, CA. Reception to follow. Visalia: Wednesday, May 26, 2021 11:00 A.M at Gateway Church of Visalia, 1100 S Sowell Street. Pastor Westbrook will be buried in his hometown of Electra, Texas. In lieu of flowers, donations may be sent to Vanguard University, 55 Fair Drive, Costa Mesa CA 92626. Memo: In memory of Floyd Westbrook. Tributes and notes for family are being gathered online: https://www.mccormickandson.com

Pastor Floyd Edwin Westbrook peacefully passed from this world to the next at his home in Laguna Woods on May 5, 2021. Born in Electra, Texas to Hiram and Berneice Westbrook, he was beloved by his family and the congregations he pastored during... View Obituary & Service Information

The family of Floyd Edwin Westbrook created this Life Tributes page to make it easy to share your memories.

Send flowers to the Westbrook family.