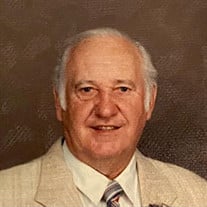 Frank Eckert Kling, Sr. ninety-five (95), of San Clemente Ca. passed on Sunday May 30, 2021 in San Clemente of a heart failure. He was born on June 24, 1925 and was the son of Frank W. Kling and Alfreda Eckert of Orange, New Jersey. He is predeceased by his brother Walter Kling, Lois Sambach and Carol Byrne. Frank was both artistic and athletic. He played baseball, basketball and softball in his hometown of Orange. He enjoyed bowling, took up golf as an adult and at the age of ninety was able to shoot his age. He resided with his wife and family in Livingston N.J. until April of this year when he and Kay moved to their son’s home in San Clemente. He was married September 23, 1951 at Our Lady of the Valley R.C. church in Orange N.J. to Kathryn (Kay) Bryla Kling. He attended Orange High School and Bloomfield College, Bloomfield N.J. and was employed at Western Electric Company in Union N.J., retiring in 1985. Frank was an avid golfer his entire adult life and was a member of the East Orange Country Club for many years in retirement. During his golfing years he won numerous local and statewide golf tournaments He also enjoyed drawing holiday pictures for his grand-children, doing crossword puzzles and watching both his son and grandson play football in high school and college. Frank was a veteran of WWII, having served with the U.S. Coast Guard, enlisting June 23, 1943 until his Honorable Discharge May 8, 1946. He was stationed aboard the USS Richie during his entire enlistment as Sonar man. His Theater of Operations were the North Atlantic Ocean, and after D-Day the USS Richie was sent to the Pacific where it engaged in the battles of Iwo Jima, at which the Richie was designated Control Ship, and Okinawa. After surrender by Japan, the USS Richie spent the next year in the South China Sea, serving as the U.S. presence in the area. The war years took the USS Richie to the Atlantic and Pacific Oceans, Mediterranean Sea, English Channel, Bering Sea, Yellow Sea and South China Sea. His Military Medals are American Campaign; EAME Campaign; Asiatic-Pacific Campaign with 3 Bronze Stars; World War II Victory Medal; American Defense Service Medal; Presidential Unit Citation; New Jersey Distinguished Medal. After the war Frank and Kay met and married September 23, 1951 First living in Orange, they moved to Union and then Livingston, where they lived for sixty years on Sycamore Ave. Frank was husband and father to a wonderful family of four children. He was a father figure, friend and confidant to all four of his children and their spouses. He was a loving husband to Kay, and they had a joyous life as husband and wife for almost seventy years. He is survived by his wife of sixty-nine years Kathryn Bryla Kling also of San Clemente Ca., children Kathleen Kling Drew and her husband William Drew of Ridge Md. Carla Smith and her husband Daniel Smith of Westminster Co., Frank Kling Jr. and his wife Terry D. Kling of San Clemente Ca. and Lisa Kling Schwartz of Hellertown Pa. Frank was grandfather to Derek Smith, Brandi Cameron his partner, of Sunland Ca, Lauren Drew, KJ Carrick of Washington D.C., Kaylyn Templeton and her husband Joel of Costa Mesa Ca., Kelly Kling, her fiancé Jeffrey Pfingsten of Helmville Mt., Jordan Kirlin and her husband Chris of Westminster Co., Bethany Belinski and her husband Chris of Denver Co., Samantha and Kimberly Schwartz of Hellertown Pa. and Kevin Kling and his fiancé Emily Africa of San Clemente Ca. and Great-grandchildren Riggs and Rhett Templeton, and Quill Kirlin. He is predeceased by his siblings and many lifelong friends made over the years through St. Philomena’s R.C. church in Livingston and his many years playing golf. Frank was a loving, dependable and generous man to his wife, his family and his friends. He will be missed but never forgotten. Frank will be buried with military honors at Miramar National Cemetery in San Diego on July 13 2021. Tuesday, July 13 Day of Service Viewing 10am - 12 pm McCormick & Son Mortuaries Funeral home in Laguna Woods, California Address: 25002 Moulton Pkwy, Laguna Hills, CA 92637 Phone: (949) 768-0933 Light Lunch provided and then we will follow the funeral hearse to the cemetery Cemetery Service 2pm - 2:30pm Miramar National Cemetery is a federal military cemetery in the city of San Diego, California. It is located in the north west corner of the Marine Corps Air Station Miramar on the grounds of old Camp Kearney and Camp Elliott. Address: 5795 Nobel Dr, San Diego, CA 92122 Phone: (858) 658-7360 After Service Gathering 3pm - 10 pm Sit down Dinner and Drinks to celebrate Frank's life Sunset Room Hotel La Jolla, Curio Collection by Hilton 7955 La Jolla Shores Dr, La Jolla, CA 92037 https://www.hilton.com/en/hotels/sancuqq-hotel-la-jolla/?SEO_id=GMB-QQ-SANCUQQ&y_source=1_MzEyNTg3My03MTUtbG9jYXRpb24uZ29vZ2xlX3dlYnNpdGVfb3ZlcnJpZGU%3D Rooms are available at the hotel if anyone wants to stay the night.

Frank Eckert Kling, Sr. ninety-five (95), of San Clemente Ca. passed on Sunday May 30, 2021 in San Clemente of a heart failure. He was born on June 24, 1925 and was the son of Frank W. Kling and Alfreda Eckert of Orange, New Jersey. He is... View Obituary & Service Information

The family of Frank Eckert Kling Sr. created this Life Tributes page to make it easy to share your memories.

Send flowers to the Kling family.