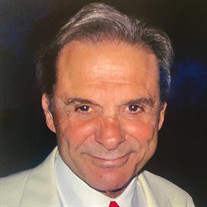 Born as a “depression baby” in Youngstown, Ohio to Anthony & Rose Panza, Frank spent his childhood playing kick the can and making sleds out of curtain rods. At the age of 5, Frank and his friends had to steal bread from the back of the bread truck because there was no food to eat. He had holes in his jeans and said that he would never wear a pair of jeans again. Frank graduated from East High School School in 1948 and then enlisted and served in the U.S. Air Force for four years during the Korean War. He spent time in many places. Great Falls, MT specifically had some of his fondest memories. Frank was a bartender and served drinks to every man in the U.S. Air Force. He also played saxophone and clarinet in the U.S. Air Force band. After the Air Force, Frank moved out to California, where he fell in love with the beautiful weather and the glamour of Hollywood. He attended Los Angeles City College for three years and worked at the Villanova Bar on the famous Sunset Strip, where he served and became friends with several well-known celebrities such as: Frank Sinatra, Harry James, Dean Martin, Cary Grant, Jackie Gleason, John Wayne and many others. Frank loved to dress. He wore only the finest suits, made by the world famous Jack Taylor. In 1959, Frankie Panza Jr. was born. Frank was such a proud father, taking Frankie with him everywhere he went. He put Frankie through college at Notre Dame, where Frankie majored in business and became a licensed broker and import manager for Berry & McCarthy Shipping Co. Unfortunately, Frankie passed away on June 11, 2011. In 1967, he began working as a bartender at the Santa Anita Race Track. Frank was the head bartender in the Chandelier Room at the Turf Club for over 54 years. Even after moving to Orange County, CA, he would still drive back and forth 130 miles a day to work at the track. Frank worked until he was 91 years old as a bartender. Frank always brought his classy style mixed with a bright light of effervescent joy to his work and everyone that he met. “Let me say Frank is an absolute gentleman of the first order, with a set of rare mannerisms and principles that are a happy reminder of a simpler time when quiet grace was the norm and a gentleman wouldn’t think of leaving the house without a tie.” Quote by David Mau (Oct 28, 2019) Frank also worked as a background actor on numerous television shows and films such as: A Star is Born, Sea Biscuit, Shameless, Harry’s Law, Dexter and ER. He worked and became close acquaintances with stars such as John Stamos, William H. Macy and Robin Williams. Frank is now survived by his sister Gloria Raimondi, along with many nieces and nephews. We celebrate Frank’s life. He will forever live on within our hearts and within the many lives that he has graced along the way. We rest in comfort knowing that Frank has been joyfully reunited in Heaven with his son, Frankie Panza Jr. and parents Rose & Anthony Panza. “The best is yet to come” – Frank Sinatra

Born as a &#8220;depression baby&#8221; in Youngstown, Ohio to Anthony & Rose Panza, Frank spent his childhood playing kick the can and making sleds out of curtain rods. At the age of 5, Frank and his friends had to steal bread from the back... View Obituary & Service Information

The family of Frank Anthony Panza created this Life Tributes page to make it easy to share your memories.

Born as a “depression baby” in Youngstown, Ohio to Anthony &amp;...

Send flowers to the Panza family.