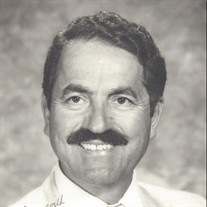 Gerald Theodore Olson Sr. (Jerry), March 10, 1928 - June 11 2021 Huntington Beach, CA Gerald was born in Rockford, Illinois. His parents, Irma Lena Widgren and Ernst Hjalmar Olson divorced when Gerald was five. His mother relocated with him and his older brother, Russell, to Des Moines, Iowa. Irma subsequently married Obadiah Dray and gave Gerald three more brothers, Alan, Jack and Ulmonte. Gerald attended and played football at North High School in Des Moines, leaving to join the Marine Corps toward the end of WWII. He was a seagoing Marine, serving in the China Sea. Toward the end of his Marine Corps service, Gerald was stationed on Treasure Island in San Francisco, playing left tackle on the Treasure Island Pirates football team. While serving in San Francisco he met his future bride, Jean (Georgina) Vujovich. They married in 1948. Jean and Gerald soon started a family. Gerald Jr, Kathleen, John, and Carol were all born between 1950 and 1955. Gerald enrolled in the University of San Francisco and graduated with a B.S. in History, in 1953. His intellectual life was forged at USF, where he developed a lifelong appreciation of and respect for his Jesuit instructors. While a student at USF, he joined the Army ROTC, which set him on a journey to an officer’s commission and a 30 year career in the National Guard and Army reserve. He retired from the Army at age 55, attaining the rank of Lt. Colonel. Gerald began his teaching career in 1955 at Lowell Junior High School in Oakland. He soon moved on to Oakland’s McClymonds High School, where he taught for several years. During this period, a number of his students commented that Mr. Olson, with his athletic physique and glasses, looked like Clark Kent. In the summers, Gerald served as the manager of the Castlemont High School Pool’s swim-to-live program, receiving a photo story in the Oakland Tribune. With the help of an older colleague, Daniel Germino, Gerald and Jean purchased their first house in Hayward, CA. He then began teaching at Castro Valley High School where he served as the announcer during the school’s football games. In 1963, Gerald was the recipient of a National Defense Education Grant, to obtain a Master’s degree in counseling and guidance at University of Southern California. The family moved to the L.A. area for a year, and while there, enjoyed attending USC football games. The family then moved back to Hayward where Gerald became a guidance counselor at Canyon High School. In 1968, Gerald was accepted into a Ph.D. in education program by The University of California, Berkeley. He completed his degree in 1974. He was exceedingly proud of being a Golden Bear. After receiving his doctorate, he moved to Colorado to take a job in the state’s Education Department. While there, he built strong friendships and enjoyed great skiing opportunities. He then moved back to California to complete his career in education with the Los Angeles County Office of Education, where he worked in Educational Support Services, Curriculum and Instructional Strategies, and Instructional Technologies. Post retirement, besides sailing his boat, and continuing his skiing habit, Gerald became an avid cyclist, participating in 100 mile bicycle races in Baja California, and in many touring trips all over the United States. He and Jean traveled extensively, taking trips to Germany, Montenegro, Serbia, Croatia, Switzerland, Greece, the U.K., and to his ancestral homeland Sweden, where he developed lasting relationships with cousins, Hans Hultman-Boye and Sten Helqvist, and their families. Gerald exercised his creative impulse through his poetry, published in many chap books an in a volume of collected works: Songs from a Cave and Other Selected Poems. Gerald passed away of natural causes at home surrounded by his wife, Jean, and four children, Gerald Jr., Kathleen, John and Carol. Gerald T.Olson, Sr. is survived by his wife, Jean Vujovich Olson; children, Gerald Olson, Jr. (Darcee), Kathleen Olson Groves (Michael Groves), John Olson (Susan) and Carol Love (Steve); nine grandchildren, Elliott Groves (Nisha Patel), Victoria Groves Lamendola (Dustin Lamendola), Robert Love, Christopher Love (Jaime Fordyce Love), Brian Olson, Alexander Olson, Theodore Olson (Leslie), Geoffrey Olson, Anna Olson; and four great grandchildren, Olivia Lamendola, Gavin Groves, Landon Groves and Indigo Love. Contributions to the Bolsa Chica Land Trust in his memory, would be appreciated. Bolsa Chica Land Trust: 5200 Warner Ave. Suite 108, Huntington Beach, CA 92649. 714-846-1001/[email protected]

The family of Gerald Theodore Olson created this Life Tributes page to make it easy to share your memories.

Send flowers to the Olson family.