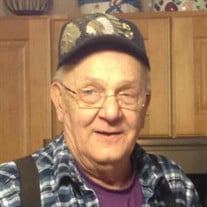 Gerald “Poppa” Skalka 5/3/1938 – 2/4/2021 Gerald “Poppa” Skalka, 82, formerly of North Huntingdon, passed away peacefully Thursday, February 4, 2021 at home, surrounded by family. He was born May 3, 1938 in North Braddock and was the son of the late Joseph and Josephine (Ondrey) Skalka. Jerry proudly served in the United States Army from 1958-1967 and went on to serve in the Pennsylvania Air National Guard, eventually retiring as a Technical Sergeant in April of 1994. Jerry wore many hats in his life from computer work to a steel worker. After leaving his childhood home in North Braddock, PA, he moved around until he ultimately settled in North Huntingdon, PA, for a lengthy portion of his life. It was here that he raised four children and accepted an additional two children to create his blended family after his marriage to SandraLee (Bishop) Skalka. He was left widowed after her passing on January 20, 2011. Jerry loved to split his time living with his daughter, Janel, in Hunker, PA, and escaping from the winter cold to warmer weather in San Diego, CA, where he would reside with his son, Vincent. Poppa enjoyed spending his days outdoors cutting grass, tinkering with the cars, and tending to his garden, which he always made the flowers look amazing. Also, let’s not forget all of those trips to Dunkin’ Donuts or to his favorite casino! He was always up for “useless trivia” as he would call it. He had such a distinct sense of humor and would do anything to make you laugh. A man of few words, but always there when you needed him. He is survived by his blended family of children, Mark Skalka, of Cabot, AR, Vincent J. (Yvette) Skalka of San Diego, CA, Marcella (Jeffrey) Harper, of Irwin, Sharon Bock of North Braddock, PA, Jennifer Skalka of Derry, PA, and Janel (David) Slebodnik, of Hunker, PA, grandchildren, Amanda (Christopher) Ickes, Brett Slebodnik, Christopher Elm, Julie McCartney, Anthony Harper, Ian Cartia, Cassandra (Nickolas) Rohm, Vincent Skalka II, Sonja Skalka, Alexis Adams, Joshua Adams, Kevin Elm, and five great-grandchildren, sisters, Betty (Jack) Hresko, Susan Visco, and Teresa Huzenic. Also, his dog Doc, was his greatest friend who gave him endless love and companionship. Along with his parents, Jerry was preceded in death by his beloved wife, SandraLee (Bishop) Skalka, and granddaughter Samantha B. Bock. There is no visitation. A private interment will be held at the National Cemetery of the Alleghenies on Tuesday, March 9, 2021 at 1:00pm. In lieu of flowers, the family has requested that donations be made in his honor to the PA Hero’s Walk at P.O Box 343 Kittanning, PA, 16201, or Veteran’s Helping Hand at Wesley Family Services 521 Plymouth St. Greensburg, PA, 15601.

The family of Gerald Skalka created this Life Tributes page to make it easy to share your memories.

Send flowers to the Skalka family.