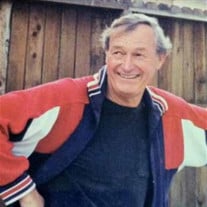 Harry George Campbell was a Renaissance Man by any definition. He built his own houses with no training in architecture; he was an expert economist, graduating Phi Beta Kappa from UCLA. He was an aerospace expert, an inventor, an intellectual and a world traveler. After graduation, he worked for Douglas Aircraft Co., but quit his job after marrying Marguerite to travel throughout Europe. When the couple settled down to raise their family of two girls and two boys (in a house that Harry, of course, built in Mar Vista), Harry was working for the Rand Corporation. All the while, he spent time with his family, instilling in his children an appreciation of music, education and travel. The Mar Vista home was the center of many parties and get-togethers, including the annual Boxing Day celebration that the Campbell family and friends continue to celebrate today. In retirement, Harry, a Angelino through and through, nevertheless crossed the Orange Curtain to build his second home, this one in Laguna Beach. Harry’s obsession with flawlessness came at the expense of speed. He insisted on every board being painted and sanded to perfection, and during the course of building his home, he achieved some dubious notoriety for having the longest open building permit in the history of Laguna Beach. Harry’s son, George helped his dad complete the house just under the city’s deadline, in time for Harry and his companion Molly Pritchard to move into the beautiful home in a place that Harry called “heaven on Earth,” where every day was “just another day in Paradise.” Harry’s wanderlust never flagged and he and Molly traveled extensively, including trips to Mexico, Argentina, Italy, France, Spain, Germany, England and Wales. In his later years, the couple took jaunts closer to home, including Washington DC, Mammoth, the Grand Canyon, Yosemite, Seattle and Portland. Harry put a premium on keeping informed. He read the New Yorker in its entirety every week, subscribed to the Los Angeles Times and was extremely interested and moved by the New York Times’ 1619 Project. Every Zoom call with family during the COVID pandemic came with a strict reminder from Harry that the U.S. has had 400 years of racism, which has led to many of the country’s current political and social issues. A staunch liberal Democrat, Harry worked tirelessly over the years to get his candidates elected. Lately, he was especially proud to support Stacey Abrams’ efforts to get two Democratic Senators elected in Georgia. She was his hero. Harry Campbell is survived by his companion of 32 years, Molly Pritchard and her son Joseph Magazenni; his four children and their spouses: Lisa Campbell (John Ivy), George Harry Campbell, David Campbell (Padma Varanasi) and Amy Cordes (Jeff Cordes); 10 grandchildren and their spouses; five great-grandchildren; his brother Robert Campbell and numerous nephews, nieces, cousins and friends.

Harry George Campbell was a Renaissance Man by any definition. He built his own houses with no training in architecture; he was an expert economist, graduating Phi Beta Kappa from UCLA. He was an aerospace expert, an inventor, an intellectual... View Obituary & Service Information

The family of Harry George Campbell created this Life Tributes page to make it easy to share your memories.

Harry George Campbell was a Renaissance Man by any definition....

Send flowers to the Campbell family.