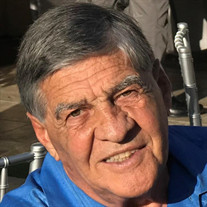 James Emilio Pasquale, born May 20, 1938 to Emilio and Donna Pasquale in Bellaire, Ohio, passed away peacefully in his sleep surrounded by his family on September 26, 2021. He bravely battled Alzheimer’s for 10 years, beating the odds. Jim spent his childhood in Turtle creek, PA with his Parents and older brother Alfredo. He went on to earn his bachelor’s degree at Slippery Rock University in Pennsylvania; and earned his master’s degree in education at Northwestern State University in Louisiana. Jim then moved to California in the early 1960s where he took a teaching position with Fullerton College in health education and as head gymnastics coach. In the early 1970s Jim started the successful Hornet men’s soccer program as head coach and then became the director of the program which consisted of men’s and women’s soccer. Jim married the love of his life, Deborah, on April 6, 1991. They resided in Brea for 28 years and relocated to Laguna Woods in 2018. Jim retired in 1998 and enjoyed cruising the globe and dancing the nights away with his beautiful wife, who referred to him as her “stud muffin”. Jim was a dedicated man who did anything and everything for his wife, daughters, grandchildren, and friends. Jim will be remembered for his fun-loving antics, quick wit, stories, and jokes which brought laughter to all who heard him. He was also very handy with tools and worked on cars as well as home improvement projects. He valued fitness and eating healthy and shared his wealth of knowledge with family, friends, and students. He could be seen jogging through small towns all over the world; and doing handstands anywhere, including on the Vatican steps. Jim is survived by Deborah Pasquale, his loving wife of 31 years; his brother Alfredo Pasquale; his four daughters Kimberly Pasquale, Regina Linton, Jami Kubik and her husband Michael, and Nicole Woodward and her husband Brandon; and nine grandchildren Jacklyn, Michael, Kathryn, Bernadette, Jimmy, Jacob, Leila, Emiliano and Sorella, who will miss their PapPap dearly. A memorial mass will be held for Jim on Friday, October 1, 2021 at 11:00 a.m. at Saint Nicholas Church, 24252 El Toro Road, Laguna Woods, California 92637. In lieu of flowers please make a donation in James's name to help find a cure for Alzheimer’s at www.alz.org

James Emilio Pasquale, born May 20, 1938 to Emilio and Donna Pasquale in Bellaire, Ohio, passed away peacefully in his sleep surrounded by his family on September 26, 2021. He bravely battled Alzheimer&#8217;s for 10 years, beating the odds.... View Obituary & Service Information

The family of James Emilio Pasquale created this Life Tributes page to make it easy to share your memories.