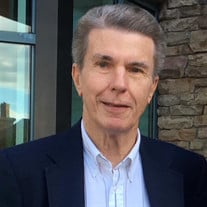 JAMES DAVID YATES (OCT. 26, 1940 - JUNE 04, 2021) Longtime Capistrano Beach resident and Saddleback College Professor Emeritus, James D. Yates, passed away from lung cancer at age 80. Jim would want it known that he never smoked, but life is full of vagaries. Jim was born in Boston, Mass. On Oct. 26, 1940 to James Allen Yates and Victoria Pulitano Yates. His father and uncle Orin perished on March 7, 1942 when the USS Sims was sunk in the Battle of the Coral Sea. Two months later, Jim's mother gave birth to Jim's brother, Orin Guy Yates. Eleven months later Jim's mother took Jim and Orin to his paternal grandparents' farm just outside Rinard, Illinois. Jim was adopted by his grandparents Luther and Mamie Yates and raised on their farm with a bevy of colorful aunts, uncles and cousins whose exploits Jim has recounted to friends far and wide. Jim attended Flora Township High School and graduated in the class of 1958. He attended Eastern Illinois University where he earned a Bachelors of Science in Education and later earned an M.B.A. from Pepperdine University in Los Angeles, California. From 1962 1968 Jim served in the US Army (6 months) and US Army Reserves (5.5 years). Jim was married in the late 1960s and divorced 10 years later. Jim taught at Garfield High School in Los Angeles and later joined the faculty at Santa Ana College in Orange County In 1980 he joined the faculty of Saddleback College in Mission Viejo, California and retired 22 years later in 2002. As a young adult, Jim sought out the mother that had left him at 2 1/2 years of age. When he found her he discovered that he had a half-sister. Jim's brother, Orin, who Jim unabashedly loved more than life itself, tragically passed at age 56 on May 12, 1999. This created a terrible hole in Jim's life, but he nevertheless filled it by undertaking many adventures and making new friends during many trips to the Australian Outback and splitting his home between Capistrano Beach and Kona, Hawaii. In Kona, he met Liddy Slejmar, whose friendship and devotion he treasured until the day he passed. Jim is survived by five nieces and nephews, several cousins and many dear friends. There is no more fitting eulogy to Jim than W.B. Yeats line " Think where mans glory most begins and ends, and say my glory was I had such friends.” Jim did not desire a traditional funeral or mortuary service. Instead, he requested that his remains be cremated and the ashes divided into two halves. One half to be scattered at the same place his brother's ashes were scattered in Port Angeles, Washington and the other half interred at the cemetery where his father and uncle are memorialized outside of Flora, Illinois. His former sister-in-law, Dana and Orin's daughters, Geina and Carlee will fulfill Jim's wishes in Port Angeles, Washington. Alex & Phil will host an "Irish Wake" celebration of life in Orange County. Details will be sent to the recipients of Jim's somewhat notorious email distribution lists. For those considering flowers or making a memorial donation, the preferred form of remembrance will benefit Bunker Cemetery. Please make checks payable to “Keith Township Cemetery Fund (Jim Yates)” and mail to: 2140 County Highway 20, Rinard, IL 62878-1006.

The family of James David Yates created this Life Tributes page to make it easy to share your memories.

Send flowers to the Yates family.