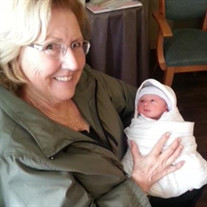 Jane Grier Ciabattoni, born on May 27, 1944, in Wilmington DE, passed peacefully on Thursday, August 19 in her Laguna Beach home. Janie was surrounded by her loving family: her husband Tony, her two children Susan and Michael, her son-in-law Michael Smith, her daughter-in-law Kim Ciabattoni, and her two beautiful granddaughters, Delaney Jane Smith and Lilliana Sue Ciabattoni. Janie was born, raised and educated in Delaware. She was the youngest of ten children born to Nelson Grier and Nellie Crossan. Always a serious student, but with a joyful and adventurous heart, she attended the University of Delaware as a pre-med student, switched to studies in English and Literature and graduated with a Bachelor of Arts degree in Education in 1966. She immediately began her career as a high school English teacher in Delaware. After beginning to date as high school juniors, Janie and Tony married in 1968 and have been together since, married for 53 years. They had their first child, their daughter Susan in 1969. Shortly thereafter, the three of them embarked on their first of new adventures as a family. As a result of an exciting job opportunity they moved to Mission Viejo, CA in 1972. Mike was born in 1973 and Janie then resumed her teaching career in 1975. Teaching children meant everything to Janie. But it also gave her the opportunity to have the same hours and schedule as her two young children, enabling her to spend precious hours and summers with them. A new adventure began in 1979 with a promotion and move to Toledo, Ohio. While Toledo was a nice place to continue raising a family, it was short lived. In 1980, her family of four gave up the mid-west for the excitement of moving back to California to seek new adventures there. Janie returned to teaching and continued to raise her family. Selflessly, she supported Tony’s efforts in an entrepreneurial opportunity that enabled her family to establish firm roots in California. In 1996 Jane and Tony sold their company and both retired to live in Laguna Beach, which, for Jane, became the most important and gratifying next adventure in her life. First, she played a prominent role in helping to design and build a beautiful beach home which she loved. Most importantly, she welcomed the two loves of her life, her granddaughters Delaney and Lilliana. Delaney came first. Watching the loving and nurturing relationship between Janie and her daughter Susie, her best friend, and her first granddaughter Delaney is simply impossible to describe. Lilliana was next and was an embarrassment of riches…her son’s daughter who, in essence, completed her life. Janie loved two things. She loved education and was a devoted and respected teacher. But she loved her family even more with a devotion that was again, impossible to describe. Janie is survived by her Husband Tony, Daughter & Son-in-law Susan & Michael Smith, Son & Daughter-in-law Michael & Kim Ciabattoni, two granddaughters Delaney Smith and Lilliana Ciabattoni, older sisters Eleanor and Teresa, and her brother Tom. A private memorial service will be held at Ascension Cemetery in Lake Forest and will be officiated by Fr. Patrick Rudolph. In approximately a month, there will be a celebration of Janie’s life with mass at St. Catherine of Siena Catholic Church in Laguna Beach with a reception to follow. Details will be forthcoming. Please know that in lieu of flowers, we are in the process of forming, in Janie’s name, our participation in the research and advanced study of brain related cancers with both Mission Hospital and the Pacific Neuroscience Institute, headed up by Santosh Kesari, MD, PhD. Your support of this endeavor sometime in the future will be greatly appreciated.

Jane Grier Ciabattoni, born on May 27, 1944, in Wilmington DE, passed peacefully on Thursday, August 19 in her Laguna Beach home. Janie was surrounded by her loving family: her husband Tony, her two children Susan and Michael, her son-in-law... View Obituary & Service Information

The family of Jane G Ciabattoni created this Life Tributes page to make it easy to share your memories.