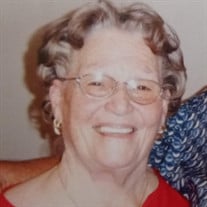 Janis Marion Aguet (nee Garbutt) was born in Stann Creek District, Belize on March 13, 1939, to Joseph and Muriel Garbutt. She was the second born of two children (the other being a brother, Earl Garbutt, who preceded her in death). Janis received her education in Stann Creek and later attended Nursing School in Belize City, Belize. In nursing school, Janis would learn valuable lessons that served her for the rest of her life, both professionally and personally. In 1964, she migrated to the United States of America where her skills would translate into a career in the medical field, working at Good Samaritan Hospital, as well as a private nurse. After arriving in California, Janis wedded Cassian Aguet in 1971. Janis was the mother to three amazing children who meant the world to her; she loved them unconditionally and never abandoned her role as provider, counselor, teacher, and guide. Janis possessed a heart of gold and would “give the shirt off her back” to anyone in need. Her genuine warm, loving, caring, and giving personality was evident to everyone she met. Janis’ friends were many, both in the U.S.A and in Belize. She selflessly gave of herself while not expecting anything in return. To that end, cousins became brothers and sisters, and friends became family members. The simplest pleasures in life bought great joy to Janis. She loved spending time in her kitchen creating delicious meals for her family. She was renowned for her cooking and baking in which “love” was her main ingredient. She was certain to share her knowledge of the Belizean Creole culture and traditions with her children, grandchildren and to her great grandson. Janis would make milk cake for birthdays, rice and beans for Sunday dinner, and hot cross bun and fried fish for Easter. In addition, Janis always baked creole bread, powder bun and black cake at Christmas. All her recipes will live on through her children (as best as possible)! Janis Marion Aguet is survived by her husband, Cassian, her daughters, Donna and Deborah (Debbie) her son Sean and step- son Shayne. She is also survived by her granddaughters, Ashlie, Gabrielle and Marlee. She has one great grandson, Kameron and a host of nieces, nephews, cousins, goddaughters, Jackie Carter, Shirley Leslie, Charlena Yorke, and godsons: Marlon Lennon, Mark Young and Stacey Gentle, and other relatives and friends. To say that Janis, who is also lovingly known as ‘Ms. J” will be missed greatly is a gross understatement. Ms. J. was loved by many and will be missed by all who knew her.

Janis Marion Aguet (nee Garbutt) was born in Stann Creek District, Belize on March 13, 1939, to Joseph and Muriel Garbutt. She was the second born of two children (the other being a brother, Earl Garbutt, who preceded her in death). Janis received... View Obituary & Service Information

The family of Janis Marion Aguet created this Life Tributes page to make it easy to share your memories.

Send flowers to the Aguet family.