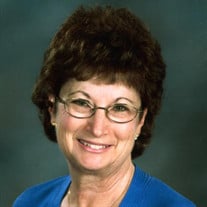 Jo Ann Melnechuk Merrell, 75, went home to be with her Heavenly Father on January 18, 2021. She was born February 16, 1945 to the late George and Marie Blain Melnechuk. In her childhood through the 1940s and early 1950s, Jo Ann lived and grew up in many places including Puerto Rico and Japan, since her father was in the Navy. By the early 1960s when her father retired from the Navy, she was a senior in high school and lived in Anaheim, California. In 1963 she graduated from high school and began attending California State University at Long Beach, where she met her future husband, Tom Merrell. They were married on November 20, 1965 in Anaheim. In 1976, with their two children, Cathy and David, they moved to San Juan Capistrano, California. In 1979, they adopted two year old John to complete their family of five, and have lived in San Juan Capistrano for 40 years. Jo Ann loved reading, talking to her grandchildren and other family members. She made her church the center of her social and spiritual life. She enjoyed being a part of a Christian book club and was active in her Bible study group and other activities at her church. She conducted special educational experiences for friends and the public, such as an exposition at Baker Creek Community Church in McMinnville for the total solar eclipse in 2017. Jo Ann received her B.S. in Physics from California State University, Long Beach, a Masters degree from California State University, Fullerton and her M.A in Science Education at the University of Sydney. She taught physics, math, and astronomy for 25 years at various institutes, including Capistrano Valley Christian High School, Tarbut V’Torah Middle School, Santa Margarita Catholic High School and Saddleback College, where she taught as an Associate Professor in the Physics/Astronomy Department. During her career she received the Presidential Award for Excellence in Teaching, NASA Newmast Award, and the Toshiba Award for Innovative Lessons. She was also a published author, having written Christian family devotionals, a variety of science teaching books and poetry. Jo Ann was also a member of P.E.O., a philanthropic organization for the advancement of women through scholarships and grants. Jo Ann is survived by her husband of 55 years, Thomas G. Merrell, two sons David Thomas Merrell and his wife Alyson Bandy Merrell of Nicholasville, Kentucky, and John David Merrell and wife Laura Hutchinson Merrell of Antelope, Oregon. A sister, Bonnie Melnechuck Stevenson and husband Steve Stevenson of Oceanside, California. Two grandchildren, Matthew David Merrell, and Kira Quinn Merrell. She was preceded in death by a granddaughter, Kloe Grace Merrell, in 2015, and followed in death by her daughter, Catherine "Cathy" Ann Merrell in 2021.

Jo Ann Melnechuk Merrell, 75, went home to be with her Heavenly Father on January 18, 2021. She was born February 16, 1945 to the late George and Marie Blain Melnechuk. In her childhood through the 1940s and early 1950s, Jo Ann lived and grew... View Obituary & Service Information

The family of Jo Ann Merrell created this Life Tributes page to make it easy to share your memories.

Jo Ann Melnechuk Merrell, 75, went home to be with her Heavenly...

Send flowers to the Merrell family.