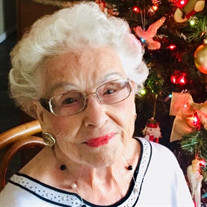 Katherine was born on her family farm in Otis, CO on May 11, 1920. Her parents were Charlie Littleton and Ethel Hall Littleton. Unfortunately, her mother passed away when she was only 18 month old. She was raised by her Dad and her grandmother, who lived in town. She graduated from Otis High School. Mother and Dad married in 1939 and they spent the next 68 years together. In 1940, they moved to San Diego, they had two daughters, Judy and Nancy. After the war, they relocated to Inglewood because Dad was finally able to start his career in chemical engineering at Mobil in Torrance, CA. Mother's career was being the best wife and mother she could be. She was a wonderful cook and baker. There were always fresh cookies and pies. She was very busy sewing clothes for her girls or taking care of Grandma Layher who lived near us after Grandpa Layher passed away. She was also very active in the Presbyterian Church and P.E.O. Mother and Dad loved California but never forgot their family in Otis. As soon as school was out, we headed for Colorado to visit our grandparents and cousins. Dad always helped Grandpa Littleton with the wheat harvest After Dad retired, they returned to the San Diego area which they loved. They lived in Vista until they decided to move to Orange County to be near Judy. Mother lived alone after Dad passed in 2007. She had wonderful caregivers who helped her remain at home until two years ago when she moved to Sunrise Haven. She had loving care there until her passing on August 29, 2021. She will be remembered by all her friends and family as the very best wife, Mother, Grandmother and Great Grandmother. She is survived by her daughters, Judy and Ron Dorsett and Nancy and Buster Field. Her grandchildren, Jeffrey Moore, Greg and Isabel Moore, Kimberly and Juan Castaneda and Nicole and Frank Breland. Her "Greats" as she called them are Frankie, Sammy, and Andrew Moore, Katie, Natalia, and Fernando Castaneda and Kaitlyn and Kylie Breland.

Katherine was born on her family farm in Otis, CO on May 11, 1920. Her parents were Charlie Littleton and Ethel Hall Littleton. Unfortunately, her mother passed away when she was only 18 month old. She was raised by her Dad and her grandmother,... View Obituary & Service Information

The family of Katherine May Layher created this Life Tributes page to make it easy to share your memories.

Send flowers to the Layher family.