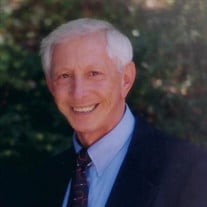 A Life of Achieving & Giving Keith Breon, beloved husband, father, brother and grandfather, passed away on May 4th, 2021. It has been said, “It’s not what happens to you in life, it is what you do with what happens to you in life that counts” What Keith did with his life was a model of how both to live and give. Keith Breon was born January 26, 1936 on a farm near a small town of Varina, Iowa. He attended school in Varina from first grade to halfway through the 11th grade, and then transferred to the neighboring town of Fonda, where he graduated from high school. He began college in Storm Lake, Iowa and transferred as a sophomore to Arizona State Teachers College. He completed his master’s degree in education, and then attended Law School at Drake University in Des Moines, IA. He then transferred to Law School and graduated at the University of Arizona. Keith enlisted in the U.S. Army for 3 years in 1957 and instructed young officers on nuke missiles in Arizona, He received an honorable discharge in 1960. He served as a secondary school teacher, a university administrator, a school district superintendent, and a school board member. After being admitted to the Arizona and California Bar, Keith served as a Deputy District Attorney in 1971 for the San Francisco District Attorney’s office. In the 70’s, he founded the law firm of Breon, Galgani & Godino, and specialized in representing school districts throughout the state, and Keith pulled from his extensive educational background and experience to serve these sectors with a keen acumen. In the 80’s, Keith headed the reorganization of the law firm which became Breon, O’Donnell, Miller, Brown & Dannis. The firm continued to specialize in representing school districts (over 150), and provided services ranging from telephone advice to conducting monthly consortium meetings and providing full legal and labor relations services. In February 1998, he co-founded the law firm of Breon & Schaeffer, and continued to serve all of the school district clients and conducted monthly consortium meetings for 20 school districts in the Orange and Los Angeles counties for approximately 20 years. He had extensive expertise in all aspects of personnel, human resources, public sector, and labor relations, and was the named attorney on several personnel related cases and several early precedent-setting Public Employee relations Board (PERB) decisions. He negotiated hundreds of contracts, handled many unfair practices and grievances and provided extensive Brown Act and conflict of interest advice. He was a frequent lecturer statewide on current issues in education, drawing on his experience in assisting the public schools on the full spectrum of legal matters affecting their agencies. Throughout his law career, Keith had several accomplishments. He argued and briefed two cases in the California Supreme Court, published 15 Appellate Court cases, and at least 20 more unpublished or DE published cases in the Court of Appeal on behalf of school districts, and argued cases in the California Court of Appeals in San Francisco, San Jose, and Los Angeles. He tried many jury and court cases in state and federal court on behalf of the school district, and their elected officials and employees. Throughout his life, Keith gave his time and energy to various charitable organizations, including the Sierra Club, CHOC hospital, and cancer-fighting causes. Keith enjoyed playing basketball in high school, and outdoor activities like running and walking, and gardening throughout his life. He enjoyed traveling to new places to explore different cultures, restaurants and cuisines, and meeting new people. He loved to research, talk about, and share different wines, and one of his favorite events was the Breon Family Reunion Picnic – attended (at times) by over 100 relatives – which he flew out for and participated in annually for over 20 years. He was preceded in death by his parents Lester and May Hewitt Breon, his sister Dorothy, and brothers Donald and Marlin. He is survived by his sister Arzetta and brother Verlin “Toad” who live in Iowa, and Verla who resides in Florida, and his loving wife Shirley. Keith had 2 children, Lauren and Craig, a son-in-law David Hall, and granddaughter Brooke Hall, who is a nursing student, all residing in Oregon. Memories, laughter, and love are the treasures we keep forever. Let these good memories, play over and over in our heart, for those we love. The service will be followed by a celebration of life at the residence of Laurie and Les Matsumoto (sister and brother-in-law of Keith’s wife Shirley)

The family of Keith Verl Breon created this Life Tributes page to make it easy to share your memories.

A Life of Achieving &amp; Giving

Send flowers to the Breon family.