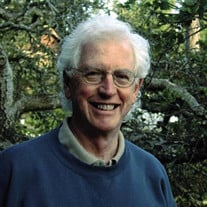 Kenneth Clarke Topping passed away peacefully on March 5, 2021 at the age of 85 from complications of Parkinson’s disease at his residence at San Clemente Villas by the Sea, San Clemente, California. He is survived by his wife, Phyllis Topping, his sons, David and Bruce Topping, David’s wife Jody, grandchildren Ryan Topping and Erika Hoffman, great-grandchildren Anderson and Paige Topping, nephews Richard Fridell and Bayete Henderson, niece Nancy Acosta, and many others in their respective extended families. Born on April 28, 1935 in Kobe, Japan to Willard and Evelyn Topping (American Baptist missionaries), Ken had two siblings, Barbara Fridell, and Henry Topping (died in infancy). Ken spent the first five years of his life in Himeji, Japan. Just before World War II broke out, his family moved to the San Francisco Bay Area, then to Boulder, CO for several years, eventually returning to post-war Japan where Ken attended Yokohama American High School. He moved to Redlands, CA to attend the University of Redlands, where he majored in Sociology, performed in the Drama Trio, and met the love of his life, Phyllis Brewer. Shortly after graduation in 1956, they married in Redlands and began their wonderful 64-year collaboration. Ken and Phyl spent their first year together at the University of North Carolina, Chapel Hill, where Ken pursued post-baccalaureate studies. They then returned to California, settling in Covina, where Phyl’s parents and sister resided. In the first three years of their marriage, they were blessed with their two sons, and Ken diverted from his intended career as a marriage counselor and worked for LA County in downtown Los Angeles as a regional planner from 1957 to 1973. He left his position at LA County to become the Director of Planning for San Bernardino County and then the Deputy Administrator for Environmental Public Works, while living once again in Redlands. Ken was appointed by Mayor Tom Bradley in 1986 as Director of City Planning for Los Angeles, where he had an influential role in projects that included the Getty Museum, Hollywood Community Plan, routing for the Metro Red Line subway to Universal City, and the city’s first zoning update using GIS (geographic information systems). Later in his career, Ken served as General Manager for the Cambria Community Services District, Visiting Professor at the Disaster Prevention Research Institute of Kyoto University in Japan, and lecturer in City and Regional Planning at California Polytechnic State, San Luis Obispo. His work also included numerous consulting, research, and advisory roles, along with serving on commissions, including the Planning Commission for San Luis Obispo County. He is recognized internationally for his work on earthquake and other disaster resiliency issues including advisory work after Hurricane Katrina, Hurricane Sandy, and the Kobe earthquake. He authored and coordinated many significant articles, studies, and books. Ken had a vision for the role of planning in guiding communities to solve environmental and hazard problems and had unique skills for implementing this vision. His consistent voice, persistent persuasion, application of emotional intelligence, ability to build bridges across agencies and disciplines, and vision of safer cities through applications of environmental and climate science led to Ken’s career being highlighted in a session entitled “At the Forefront: Work of a Resilience Planning Pioneer” at the 2019 conference of the California chapter of the American Planning Association in what could be considered a well-deserved lifetime achievement award. Ken’s non-vocational interests included sailing, hiking & camping, walking, and both making and enjoying different types of music. A self-taught guitarist, he shared his life-long love of music passionately with his family, including forming a family folk music group, leading to both his sons pursuing successful careers in music teaching and performance. His gentle nature, compassion for others, dedication to his profession, perseverance, and intelligence are just some of the many wonderful attributes that will live on in the memories of his family, colleagues, and friends all over the world. In lieu of making donations to a specific charity in memory of Kenneth Topping, the family asks only that people make conscious efforts to be respectful, caring, and loving of one another and the environment, attributes exemplified by his life in helping to create a more peaceful and sustainable world for future generations. A celebration of Ken’s life will be held at a time and place to be determined by the family.

Kenneth Clarke Topping passed away peacefully on March 5, 2021 at the age of 85 from complications of Parkinson&#8217;s disease at his residence at San Clemente Villas by the Sea, San Clemente, California. He is survived by his wife, Phyllis... View Obituary & Service Information

The family of Kenneth Clarke Topping created this Life Tributes page to make it easy to share your memories.