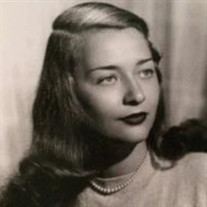 Beloved mother and grandmother Lillian Carol McGuigan sometimes called "Sis" or "Lil" Passed away just shy of her 95th birthday, peacefully in her sleep, on January 7, 2022 in her comfortable apartment at Las Palmas Assisted Living in Laguna Woods, California, where she had resided the last few years. Born in Chicago, Illinois on Feb 3, 1927, she was the younger daughter of Mary Rich (Keserich) Vidovich and William Vidovich. Her loving and beloved older sister Eleanor Smith pre-deceased her by 6 months. Eleanor and "Sis" were very close all their lives and were blessed with being able to live near each other the last 20-30 years. They both served as Editor of Bowen high school newspaper, were the first in their family to attend college and even receive post-graduate degrees. Lillian attended the University of Illinois and then received her B.A. at UCLA, where she met her husband Frank Joseph McGuigan and they were married July 29, 1950. Lillian went on to earn a masters' degree in speech therapy and taught for several years before her first child, Joan April, was born. She had Constance McGuigan in 1957 and Richard Patrick McGuigan in 1961. The family spent time in Paris where she attended the Cordon Bleu and she loved cooking all her life. She was an excellent hostess, homemaker, mother, grandmother, teacher, sister, wife, and cousin. She prepared beautiful meals and birthday parties for her children, family, friends, and at holidays. Upon her divorce at age 59, she courageously moved across country from Kentucky to California with the help of her sister Eleanor and brother-in-law Emel, and immediately was chosen to teach in Northridge, California. She determined to continue teaching until she had earned her retirement benefits so as to be independent in her old age, so she worked 15 years until age 74. She was proud that she was able to be financially independent and strong, taking care of herself and managing her affairs effectively, a very unusual accomplishment for a woman of her generation. She loved swimming even into her 80's. At the end she still knew who her children were and her last words to them were: " I love you, I love you, I love you; tell everybody I love them." Just before she passed, she said: "I want to go home." Surviving are her son Richard (Rich) Patrick McGuigan of Florence Kentucky, his wife Cathy and daughters Caitlin and Jenny; daughter Constance McGuigan of Cathedral City, California and her cat Hap; Joan April McGuigan and her husband Richard Hirn and daughter Chelsea of Chevy Chase, Maryland and Laguna Woods, California, cousins Colleen and Ed Mayes of Burr Ridge Illinois and Florida; Ward Miller and children Haden and Catlin and wife Cathleen; Nick Keserich and wife Cathy and family; Danny Vance and Cathy; Tom Baker and family Susanne, Kate, Meg and Colleen; Matt Baker and family, Joyce Slutsky, Cary Izzy, Fran Arvia, and many others. She loved the poem "Little by Little" which encouraged her as she became wheelchair-bound and had to move more slowly, as well as her high school slogan "Do the Right Thing", and often coached herself with the phrase: "Just Do it." No flowers or donations are suggested, but she wanted the prayers Hail Mary and Our Father to be recited for her. She and Eleanor spent much time enjoying Dana Point beach and they loved the ocean. Eleanor's husband Emel was cremated so Eleanor could have his remains with her for many years, and because she and Emel's remains are scattered at sea, so will be Lillian's. A Mass will be held for her at St. Louis Catholic Church in Cathedral City, California on Wednesday January 19 at 7:30 a.m. A zoom memorial will be planned in the near future. Little by Little: One step and then another, and the longest walk is ended. One stitch upon another, and the longest rent is mended. One brick upon another and the highest wall is laid. One snowflake upon another and the deepest snow is laid. "A beautiful life, rich with experiences, evolving into deep wisdom, strength, courage and love."

The family of Lillian Carol McGuigan created this Life Tributes page to make it easy to share your memories.