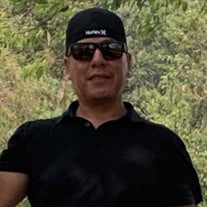 Lucio was a loving husband and caring father to his wife Faviola Tellez Moreno, his daughter Alison and son Nathan Tellez. He was one of the youngest sons of Rosenda Castillo Pacheco y Cipriano Tellez Ramirez. He was born alongside his twin brother Miguel on December 15 1973. His other brothers and sisters are Rafael, Horacio, Melitón, Faviola, Salud, Angelina, Jesus, and his nephew/brother Daniel. His physical self passed from this world this August the 28th, 2021. He will forever be missed. A well known Spanish song lyric says, “Nadie es eterno en este mundo,” (no one is eternal in this world) and I believe that’s true to an extent. Although, our physical body returns to dust, our souls like our memories will keep living on. The memories we leave are imprinted in the hearts of the people we love and they will persevere beyond the time we live in this world. Our brother Lucio was big in affective imprinting his presence (his memory) onto to others. He was an extremely happy person who did everything in his power to make sure that you were living in the moment when you were in his presence. He was the reflection of those we know as the “life of the party. “ Many family and friends have stated,” a party was not a party without Lucio.” I have a padrino (godfather) who was very fond of him who would say every ten minutes whenever we had a party, “y Lucio, y Lucio?.” He anxiously wanted to know what time Lucio was getting to the party so the party can get started. Lucio was not only the life of the party but he was super protective of those he truly loved. As a personal example, I really feel that I owe him my life. You see, I, as an only child was raised along side him as a sibling as part of their already big family as both my parents had abandoned me. He did not only become a loving brother, but a loving and caring father figure. Having grown up in San Juan Capistrano in the Hispanic community, he would do everything in his power to keep me from hanging with the neighborhood homies. A world that he was a part of himself. He would go so far as threatening them just to make sure they did not let me hang out with them. He did not want me to become part of that lifestyle and fall in mischief and end up in jail. He wanted a good life for me and I will forever be grateful to him. He was our familia’s black sheep with the biggest heart. Lucio, like all his siblings originated from Matugeo, Michoacán in the central part of Mexico. It was a small agrarian town. Many of us siblings have many memories of our time growing up there. There we survived by eating what was planted and harvested. His twin brother Miguel, who he had a strong bond to remembers one time when it was time to harvest the year’s crop they both hid from our dad in the attic in the morning at 4am holding and hugging each other tight so our dad would not find them and take them to work harvesting. They would then spend the day in the streets in mischief, and would not return until they knew our dad was fast a sleep in the evening. All us siblings treasure our humble beginnings and the moments we spent together in Mexico. Lucio was always kidding around and many times played pranks on family and friends. Even as I write this obituary I think that he might just come out and say, “ I got you,” and then go on to laughing and start playing his favorite song , “Lucio Vazquez.” All our Family and friends have stated this same reflection. But we now know that this is not happening. He has gone on to be with our Lord alongside our loving parents and his brother Melitón Tellez in heaven. May they Rest In Peace . His viewing will be held this Saturday, September the 4th at McCormick & Son Mortuary from 5pm to 7pm. His religious remembrance will be at St Edward the Confessor 33926 Calle La Primavera in Dana Point this Monday, September the 6th at 11am. The Family gives our most sincerest gratitude to all those family members and friends that have been by our side through this trying time. May God bless you all.

Lucio was a loving husband and caring father to his wife Faviola Tellez Moreno, his daughter Alison and son Nathan Tellez. He was one of the youngest sons of Rosenda Castillo Pacheco y Cipriano Tellez Ramirez. He was born alongside his twin... View Obituary & Service Information

The family of Lucio Tellez created this Life Tributes page to make it easy to share your memories.

Lucio was a loving husband and caring father to his wife Faviola...

Send flowers to the Tellez family.