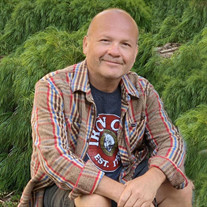 Manuel de Jesus Renderos Sanabria, 58 years of age passed on Friday, November 19, 2021, at Providence Mission Hospital in Mission Viejo. Manny/Meme as people knew him, was born April 21, 1963, in San Salvador, El Salvador to the late Graciela Sanabria Arita and the late Manuel de Jesus Renderos Lopez. He was the youngest of three children and grew up with his sisters Esther and Ceci, and his cousins Vladimir, Hector and Sara. As a child, Manuel enjoyed forming part of the Boy Scouts (Lobos) where he developed his love for the outdoors and learned survival skills such as tying knots, camping, etc. His love for music was present from a young age and he participated in the school band, in which he played the xylophone. At 12, Manny began helping around at a local auto shop and discovered his natural talent for fixing just about anything. With the help of his aunt Elba, him and his siblings came to California in the 80s. He attended Santa Ana High and later went on to work multiple service jobs ranging from a pizza shop to interior landscaping. Manny truly lived life to the fullest through simple pleasures; chatting with friends and family, sharing his love for music and good food. Manuel was preceded in death by his parents Graciela and Manuel Sr. and his cousin Vladimir. He is survived by his daughter, Cindy; his former spouse Graciela; his sisters Esther and Ceci; his aunt Elba and his cousins Hector and Sara and nieces and nephews Edwin, Josh, Evelyn, Sally and Julie. Family, Friends and others whose lives Manny touched are invited to his memorial service at McCormick and Son, at 1795 Laguna Canyon Road, Laguna Beach CA, from 11am-12pm on Monday December 6th, 2021. A post service Reception will be held at: 100 Grand Canal Irvine, CA 92620 from 2pm-4pm.

The family of Manuel de Jesus Renderos Sanabria created this Life Tributes page to make it easy to share your memories.