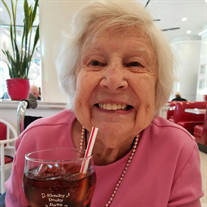 Marcella (Sally) Ilene Armell (Shipley), born October 1, 1915 in Guthrie County, Iowa, passed peacefully in her sleep as she had wished on Monday, May 2, 2022 in Laguna Niguel, CA. Sally is survived by three great-nephews Peter Shipley, Tony Shipley, Chris Shipley and niece Linda Bray. She was predeceased by husbands Robert Sanchez & Lou Armell, her brothers James Shipley & Ernest Shipley and nephew Dr. David Shipley. There are no events planned, as Sally did not wish to have services. Sally moved to California in the early 1930’s and graduated high school in Monterey, CA. She later moved to Los Angeles where she worked in various office jobs including the Department of the Navy and Boeing. Sally was inventive and told stories like selling candy bars to passengers on the Red Car Trolleys to make extra money as she rode to work. As a young woman Sally loved to dance and told funny stories about taking the ferry to Catalina Island to dance for the evening at the Casino Ballroom. Sally met her true love Robert “Bob” Sanchez while dancing at the Balboa Pavilion. Bob was an army pilot and pursued Sally with his Spanish flair while she played hard to get. They married in Monterey, CA in 1950 and settled in Los Angeles & Palm Springs until Bob’s death in 1967. Bob was very outgoing character and challenged Sally to grow and have fun. Sally learned to fly and she received her pilot’s license in the 1950’s. Sally & Bob traveled the world together and had many adventurous stories to tell from their international travels. At one point, Sally & Bob lived in Spain where she worked at the US Embassy. Bob would tease her and only speak Spanish to Sally so she would have to learn to speak Spanish. In 1954, they purchased a sportscar in France and traveled across Europe. At the end of the trip, they returned to the US on the Queen Mary with the car. During the 1960’s through 1990’s Sally lived in Palm Springs where she enjoyed the sun, traveling to Hawaii, Ocean Cruises and socializing with celebrities. She learned to drive a Ford Model T Roadster and drove in old costume in various parades. In the mid 1990’s Sally moved to Laguna Woods where she was active at Laguna Country United Methodist Church and with several close friends. Sally had some amazing experiences and stories, but she was an even more amazing person. She was truly accepting of everyone and the most grateful person you could meet. Sally had a great sense of humor and loved being silly or teasing you when she got to know you. Her favorite saying was “Hot Dog” and if you heard “Hot Diggity Dog” it was special. In her later years, many of her care givers learned to say “Hot Dog” or lovingly call her Hot Dog. Sally’s grace and kindness were contagious. Sally trusted in Jesus for her eternal life “Hot Diggity Dog” and will be laid to rest in a private family ceremony at Palm Springs Cemetery.

The family of Marcella Ilene Armell created this Life Tributes page to make it easy to share your memories.

Send flowers to the Armell family.