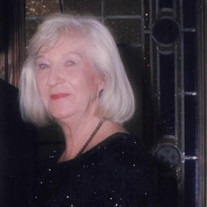 November 23, 1927 – July 8, 2021 Marilyn Grace Lombardo, 93, passed away peacefully on July 8th, 2021. In the days before her passing, Marilyn was surrounded by her children, grandchildren, great grandchildren, and close friends. Marilyn Gaertner was born November 23, 1927, in Niagara Falls, NY to Michael and Estella Gaertner. While attending Niagara Falls High School, Marilyn met the love of her life, Leonard Lombardo. They married in 1946 upon Leonard’s return from serving in the US Navy during WWII. The newlyweds settled in Niagara Falls, where their four children were born. The family moved to Southern California in 1963, first in Monrovia, then settling in Orange County. In Orange County (Villa Park), Marilyn enjoyed being a charter member of the Villa Park Women’s League and volunteering for Providence Speech and Hearing. In Villa Park is where Marilyn formed her many dear and long-lasting friendships. After passing through New Orleans on vacation in 1982, Marilyn and Leonard purchased and converted an ice cream parlor into a restaurant in the historic French Quarter. She and Leonard made the French Quarter their new home. While working together they had the time of their lives, building Pere Antoine’s Restaurant. Marilyn even adopted the New Orleans Saints as a close 2nd to her beloved Buffalo Bills. After 16 successful years they sold the restaurant and retired to Laguna Niguel, California in 1998. Marilyn genuinely loved people and believed everyone had a unique story worth hearing. It seemed she could learn a person’s life story in a first meeting, because she cared to listen. She was a quick read of people but not one to judge. Blessed with an amazing memory, Marilyn was a wealth of knowledge and always the go-to person in her family for history and facts. Her calm, comforting, and loving manner will be deeply missed. She is predeceased by her husband Leonard (2013) and survived by her children Gail Tucker, Maureen Sampson (George), Michele Lombardo, and Philip Lombardo (Kelly), sister Marie Onesi of Niagara Falls, NY, brother-in-law Marion Lombardo, sister-in-law Nancy Kingsley (David) both of Falconer, NY, along with seven grandchildren and eight great grandchildren. A private mass and funeral service is planned.

The family of Marilyn Lombardo created this Life Tributes page to make it easy to share your memories.

Send flowers to the Lombardo family.