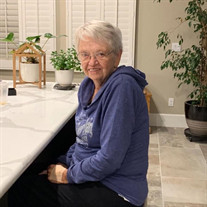 Marjorie May Rawson passed away peacefully at the age of 95 on April 28, 2021. Her extraordinary life ended at her daughter’s home in Huntington Beach, California. Marjorie was born April 8, 1926 in Perth, Western Australia to Henry Alexander Fryer and Lillian Olive Townsend. As a girl, growing up between world wars in Western Australia, her childhood was carefree and often spent at the beach. Her love of the ocean was an enduring one throughout her life. As a young woman, the world was at war and Australia was the center of the Pacific theatre. She met her one and only love , Ralph Rawson, a Navy submariner who predeceased her, while he was stationed near Perth. Their marriage of 65 years was a true love story. Marjorie became a part of the historic war bride story coming to America on the Fred C. Ainsworth ship after the war and she proudly became a naturalized American in 1952. Marjorie was a loving mother to five children, Robert E Rawson of Sebastapol, Ca, Janice L Benner (Norman) of Currituck, North Carolina, Beverly A Hendrickson (James Hazlehurst) of Huntington Beach, Ca, Barbara S Rawson (Greg McCleary) of San Martin, Ca and her youngest son Steven E Rawson who predeceased her and wrote the following message to our mother on Mother’s Day many years ago. This message echoes all her children’s sentiments. “No matter what the circumstances, I have always felt the presence of your love. Would that all people were issued with such a warranty at birth.” Marjorie was a loving Nana to six grandchildren, Kevin Baiko, Heather Rawson, Julie Riggs, Ally Karn, Sarah Hendrickson and Abby Hendrickson Smith. She was loved by seven great grandchildren, Kaela and Ava Parker, Alesio and Araceli Riggs, Isadora Rawson, Chloe and Marshall Hazelhurst. The grandchildren felt her love and appreciated her character. “No matter where I go, I carry you- your guidance, your humor, your love, with me” wrote granddaughter Ally on the occasion of Marjorie’s 95th birthday just a few short weeks before her death. Marjorie led a full and meaningful life. She devoted herself to our family as a full time mother until her children left the nest. She then turned to focus on giving to her community, returning to school and obtaining a master’s degree and credential for educating Special needs children. Her retirement years were spent traveling the world with her beloved Ralph. She, like Ralph, accepted Jesus Christ as savior realizing that though she lived a good, moral life, she was in need of a savior. Her background in the Episcopal Church led her to St. Anne’s in Fremont CA where she and Ralph enjoyed fellowship and the church enjoyed Ralph’s extensive wood-working skills. She spoke of her eternal habitation and was at peace with her home going at the end of her life. She has left friends and well wishers behind wherever she lived. A graveside service will be held at Golden Gate Cemetery where Marjorie will be interred with her beloved Ralph and Steven at a date yet to be determined. If you wish to share a recollection or remembrance of Marjorie, please feel free to bless us.

Marjorie May Rawson passed away peacefully at the age of 95 on April 28, 2021. Her extraordinary life ended at her daughter&#8217;s home in Huntington Beach, California. Marjorie was born April 8, 1926 in Perth, Western Australia to... View Obituary & Service Information

The family of Marjorie May Rawson created this Life Tributes page to make it easy to share your memories.

Marjorie May Rawson passed away peacefully at the age of 95 on...

Send flowers to the Rawson family.