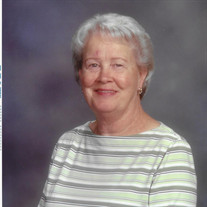 Mary Lee Herman, born December 23, 1933, passed away peacefully on February 5, 2021 at Mission Hospital Laguna Beach. She was 87 years young. Mary Lee was born in Wisconsin and moved to California with her parents, Franz and Avis Haefliger. She has three sisters; Carolyn, Vivienne and Fran. Mary Lee married and gave birth to 5 children: Charles, Donald, Cheryl, Susan and Patricia. She was heartbroken after the loss of her first-born daughter, Cheryl, while still an infant. Mary Lee raised her family in the San Fernando Valley area of Northridge. She eventually moved to Rancho Bernardo where she lived for many years. Mary Lee was a member of the Rancho Bernardo Retired Senior Volunteer Patrol, (R.S.V.P.) which became her favorite activity -- she truly enjoyed serving her community. She attended San Rafael Parish church where she and her church members traveled to Italy and Vatican City. Although she was unable to meet the Pope, it remained one of her favorite places to travel. After residing in San Diego, Mary Lee moved to Orange County to be closer to her daughter, Pati, and son-in-law, Kelly. The city of San Juan Capistrano, best known for its Mission and Swallows, was where Mary attended Mass at Mission Basilica and lived for the past twelve years. Mary Lee spent her career as a Bookkeeper and Accountant, mainly within the Newspaper industry. She started with The Van Nuys News and Green Sheet which became The Valley News, and changed again to The Daily News. Mary was also employed at The Union-Tribune when living in San Diego, where she retired in 1999. Mary is survived by her sisters; Carolyn and Fran. Sons/Daughters & Spouses; Chuck & Blair, Don & Patti, Sue & Lee, Pati & Kelly. Grandchildren & Spouses; Donnie, Danica & Jason, Jason & Shawna, Krista, Gaylen, Courtney, Kelli & Richie and Brynn. Great Grandchildren; Liliana, Jaron, Kael, Clayton, Ciadan, Liam, Sabrina, and Lukas. As well as several Nieces and Nephews. Mary Lee’s final resting place will be San Fernando Mission Catholic Cemetery in Mission Hills, CA. A private inurnment service will be announced at a later date

Mary Lee Herman, born December 23, 1933, passed away peacefully on February 5, 2021 at Mission Hospital Laguna Beach. She was 87 years young. Mary Lee was born in Wisconsin and moved to California with her parents, Franz and Avis Haefliger.... View Obituary & Service Information

The family of Mary Lee Herman created this Life Tributes page to make it easy to share your memories.

Send flowers to the Herman family.