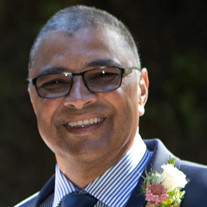 Michael Lee Curry died peacefully on February 10th, 2022, in Costa Mesa, CA after losing his battle with Younger Onset Alzheimer’s at the age of 64. Mike was born in Lawrence County, IL on March 31, 1957, to Beverly and Carl Curry. Like many military families, they moved often eventually settling in Orange County, CA where Mike graduated from Mission Viejo High School. Shortly after graduation, Mike joined the Orange County Sheriff’s Department. He rose through the ranks serving with distinction for 31 years in patrol, homicide, and a DEA narcotics task force completing his career as a sergeant. While working in the department, Mike furthered his education obtaining a bachelor’s degree from Southern Illinois University and a master’s degree from Cal State Dominguez Hills. After retirement, Mike put his talents with wood, custom cabinetry, and construction to work as a general contractor under Curry Construction. He also rehabilitated, rented, and sold properties under C&H Ventures Unlimited LLC ~ Where you always get a Sweet Deal. Mike is survived by Judy, his wife of 42 years, his son Jason Kneitel (Tina), and daughters Kira Ballinger, Erin Curry (Ali), Chelsea Chevalier (Andre); six grandsons Brody, Ronin, Owen, Luca, Lavin, and Beau. He is also survived by both parents and his sisters Kim Hogan and Tammy Williams. Mike had a great sense of humor and was a terrific storyteller never letting the truth get in the way of a good story. He read the newspaper every day and when traveling, read whatever local newspaper was available. Mike was a diehard Raiders fan, loved playing basketball, poker, fishing and running. He loved to see new places but was not really a fan of the trip itself. He would rather be instantly transported to a new location, à la Star Trek, even attending a Star Trek Convention. The Curry family often took trips back to the Midwest, Europe, historic sites as well as ski trips and cruises with friends. Judy and Mike went on the 'Coast to Coast' 200-mile hike across Northern England meeting wonderful people along the way. Mike’s Celebration of Life will be held this spring and will be private. In lieu of flowers, the Curry family requests donations be sent to The Alzheimer's Association act.alz.org/donate or The Equal Justice Initiative https://support.eji.org/give/153413/#!/donation/checkout.

Michael Lee Curry died peacefully on February 10th, 2022, in Costa Mesa, CA after losing his battle with Younger Onset Alzheimer&#8217;s at the age of 64. Mike was born in Lawrence County, IL on March 31, 1957, to Beverly and Carl Curry. Like... View Obituary & Service Information

The family of Michael Lee Curry created this Life Tributes page to make it easy to share your memories.