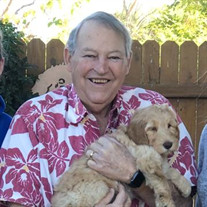 Mike McDonald was born in Los Angeles, California, on May 15, 1940, as the third child to George and Helen McDonald. His mother wanted to name him Michael Murphy McDonald, but his dad came straight from the pub to the hospital and when it was time to name him, his dad was handed the paperwork. George, with his brothers Kenneth and John standing next to him, wrote his legal name as Kenneth John McDonald. However, he was always called Mike growing up by his mom, family and friends. After growing up in Los Angeles with his sister Joyce and brother Tom, Mike played football in high school and college. After playing at LA City Junior College, he received a full-ride scholarship to play at USC. While at USC, he was on the team that won the 1962 National Championship at the Rose Bowl against Wisconsin 42-37. He graduated from USC with a degree in Public Administration. During college, Mike met the love of his life through mutual friends and told his friends that night that he was going to marry her. Mike and MaryAnn Johnson were married in June 1963 and had four children: Michael, Mark, Matthew and Megan. They lived in Anaheim, Novato, Laguna Hills and Laguna Niguel over their 58 years together. After graduating from USC, Mike spent a few years in the National Guard. Mike began his sales career at Colgate Palmolive before leaving to work at Travenol Laboratories, a division of Baxter Laboratories. In 1992, Caremark was spun off from Baxter and he worked at Caremark until he retired in 1997. His career had involved traveling and he was excited to settle back in Southern California with his family. He was known for creating relationships with everyone, including his competitors. His competitive nature, compassion for people, and friendliness made him a great leader. Mike was a very social person and still had friends from grammar school that he met for lunch monthly. While some may say he thrived in the business world and many people know him for his savvy and grit, his dedication to MaryAnn, his children and grandchildren are his true lasting legacy. In 1988, Mike and MaryAnn joined El Niguel Country Club, where he created more lasting friendships. He served on the Board and was elected President in 2002. Being part of the Club was a big part of his retirement years and he spent many days golfing with friends there. Mike enjoyed traveling with friends and family. He played golf in Scotland and Ireland, and he fished in Alaska, Idaho and Montana. He toured internationally to Austria, Switzerland, Italy, Portugal and France. Hawaii was one of his favorite vacation spots. He loved playing golf and watching football. Mostly, he loved the interaction of this grandchildren, watching them grow, compete in sports and become adults. Mike is survived by his wife MaryAnn McDonald, his children and their spouses: Michael and Belen McDonald, Mark and Stephanie McDonald, Matthew and Cristal McDonald, Megan and Api Weinert. He is also survived by his beloved grandchildren: Erin, Charles, Trevor, Sarah, Riley, Daniel, Allie, Kate, Reese, and MaryAnn. Mike also loved his many Johnson and McDonald nieces and nephews without fail. His generosity in support and advice sometimes could be too much for young minds to handle, but with retrospect we know that each one of them would love one more conversation with their opinionated, but extremely caring and loving Uncle, Father, Grandfather and friend. He will be remembered by all for the stories he was famous for sharing, the hugs he gave, and the smile he shared with everyone. In lieu of flowers please consider a donation the help support Alzheimer's. https://alzfdn.org/?gclid=EAIaIQobChMIusGA1Y3w8gIVZRB9Ch2_4wxAEAAYAiAAEgJqH_D_BwE

Mike McDonald was born in Los Angeles, California, on May 15, 1940, as the third child to George and Helen McDonald. His mother wanted to name him Michael Murphy McDonald, but his dad came straight from the pub to the hospital and when it was... View Obituary & Service Information

The family of Mike McDonald created this Life Tributes page to make it easy to share your memories.

Mike McDonald was born in Los Angeles, California, on May 15,...