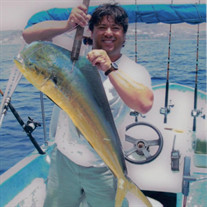 Neal Anthony Ng passed away on June 5, 2021, at the age of 58, in Mission Viejo, California. He is survived by his wife C.J. (Carol) Wiemann-Ng, his mother Jane Jackson, his father Quock and stepmother Nancy Ng, stepfather Bill Jackson, his brother Jon, and his sisters Crystal and Alicia (Lish). Neal was born on March 12, 1963, in New York City, NY. He moved with his family to Huntington Beach, California in 1974. Upon his arrival on the west coast, Neal's passion for fishing was broadened by the rich world of marine life, and grandeur of the ocean that lay in front of him. Ever a keen observer and quick learner, he taught himself to play the guitar and then furthered his passion with classical lessons. This led to him and his high school friends to forming the band, RISK. Concurrently, his interest in photography and digital videography evolved, and led to his career in digital media. Neal met the love of his life, C.J. at Mesa View Middle School and Ocean View High School, but it was not until their 10-year high school reunion that they began their romance. They married in 1995 in their hometown of Huntington Beach, CA. Their shared love for travel and adventures led to lasting memories, and together they saw the world. Neal received his BA from Chapman College in Orange, and then received an MBA degree from Cal State University, Fullerton. Neal's creativity and attention to detail were the foundation of his success as a videographer, photographer and digital medial developer. Neal's passion for his work was evident, and he brought the same passion to creating a video of a family birthday party or his fishing trips, making lasting memories for everyone in his life. While placing high demand on himself, he was as ready to overlook our foibles as he was to release the fish he caught. Always cheerful, even in times of personal adversity, he enriched our lives. He will eternally be in our hearts. In lieu of flowers, donations in Neal's name should be sent to the Surf rider Foundation at www.surfrider.org

Neal Anthony Ng passed away on June 5, 2021, at the age of 58, in Mission Viejo, California. He is survived by his wife C.J. (Carol) Wiemann-Ng, his mother Jane Jackson, his father Quock and stepmother Nancy Ng, stepfather Bill Jackson, his... View Obituary & Service Information

The family of Neal Anthony Ng created this Life Tributes page to make it easy to share your memories.