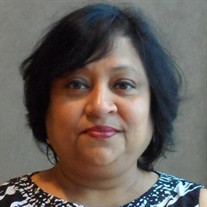 Nora Almeida was born on June 21, 1958 in Bombay, India to Edith and Archibald Almeida. She was their second child and sister to Coral and Debbie. She was baptized in the Catholic faith and received her First Holy Communion at the Eucharistic Congress attended by His Holiness Pope John Paul VI which was held in Bombay in 1964. She married Jay Valjee on February 27, 1999. Nora passed away on January 31, 2022 at UCI from heart failure. Nora attended Canossa High School and St. Xavier’s College, Bombay. She earned a degree in Economics and Political Science from the University of Bombay, India. Her professional background includes a job at Unisys as an Analyst for more than a decade. In the United States of America, she worked at Buy.com as a Director of Business Analytics for more than 15 years. In 2015, she quit her professional career to enjoy the retired life. Nora was a beautiful and simple person who was unimpressed by materialism, vanity and false appearances. She was humble about her own achievements and successes but always applauded those of others. Many of her friendships began in Kindergarten. To anyone who knew her, she is ‘unforgettable.’ She was the life of every party. One can safely say that she had never met a stranger. She was of quick and sharp wit with the ability to bring calm to any situation with ease and even a few laughs. She accepted others’ differences and lived by the tenet that ‘Only God can judge’. She believed that charity began at home and was the first to offer help in any needy situation. Nora loved to travel and got to experience other cultures and meet many people whose lives were very different from her own. She traveled extensively within India, Andaman and Nicobar Islands, the Far East, Mexico, Canada, Australia, and her beloved adopted country, The United States of America. Her best vacations were visiting and spending time with family. She enjoyed gardening. We were always amazed by her ‘green thumb’ which could turn a rose stem into a rose bush. She is predeceased by her parents, Edith and Archibald Almeida. She leaves behind her beloved husband Jay, sisters, Coral and Debbie, and many family members on both sides of her and Jay’s family. Nora will be laid to rest with her mother at Ascension Cemetery, Lake Forest, CA.

Nora Almeida was born on June 21, 1958 in Bombay, India to Edith and Archibald Almeida. She was their second child and sister to Coral and Debbie. She was baptized in the Catholic faith and received her First Holy Communion at the Eucharistic... View Obituary & Service Information

The family of Nora Almeida created this Life Tributes page to make it easy to share your memories.

Send flowers to the Almeida family.