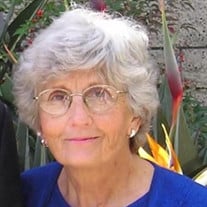 Pauline (Polly) Carter Scholl was born in Springfield, Illinois on June 15, 1938 to William Stroub Carter and Pauline Louise Maybury. She died peacefully in her daughter’s home on January 16, 2022 at the age of 83. Polly met Stan when both were students at the University of Illinois and they married September 8, 1957. Polly moved to California in 1963 and was a resident of Laguna Beach since 1974. Polly chose not to pursue a career as she wanted to stay home to raise her two children, Ed and Kathy. Her greatest joy in life was to be a mother and a grandmother. She never missed going to her children’s and grandchildren’s activities. Most recently, Polly became a great-grandmother and she was thrilled to meet her great-granddaughter, Eva. Polly was a member of South Shores Church since 1974 and was an active member of the church choir. Polly is preceded in death by her parents, her husband, Stan Scholl, and her sister, Barbara Harbold. She is survived by her son, Ed (Romana) Scholl, her daughter, Kathy (Paul) Greene, five grandsons: Michael Scholl, Brian (Ashley) Scholl, Daniel Scholl, Kyle Greene, and Matthew Greene, one great-granddaughter, Eva Ruth Scholl, sisters Virginia (Lynn) Coultas, Helen (Dick) Day, Nancy (Jack) Davison, and brother Bill (Suzanne) Carter, and by 18 nieces and nephews. The immediate family will gather this summer in remembrance of Polly’s life.

Pauline (Polly) Carter Scholl was born in Springfield, Illinois on June 15, 1938 to William Stroub Carter and Pauline Louise Maybury. She died peacefully in her daughter&#8217;s home on January 16, 2022 at the age of 83. Polly met Stan when... View Obituary & Service Information

The family of Pauline C Scholl created this Life Tributes page to make it easy to share your memories.