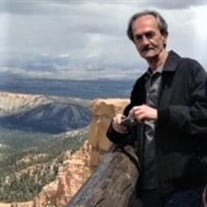 Randy Thomas Kerr, age 72, passed away on August 16, 2021 due to Stage 4 cancer, which was recently diagnosed in July, 2021. His decline was rapid and his sudden death surprised family and friends. Learning of the seriousness of his illness and the short time he had left, at his request he was discharged from the hospital and passed away at his home in Moorpark, California. He leaves a sister, Sheila, a brother-in-law, Claude, a niece, Lauren and a grand-niece, Aria (age 6). Randy was born March 21, 1949 to Mary and James T. Kerr in San Angelo, Texas. His 3 ½ year old sister, Sheila, welcomed him into the family and loved having a little brother to play with. The family moved from Texas to California in the mid-1950’s and settled in Southern California where Randy attended elementary, high school and Pierce College. Following college, he attended a data process training program at a local business school. In August 1970 he enlisted in the U.S. Navy where he served on the USS Hancock, stationed in Japan, the Philippines and Viet Nam. The performance reviews he received during his tour of duty noted that “though normally ‘terse’ he conveyed an ease with both written and oral communication” and that he “had the respect and friendship of all his shipmates” He was honorably discharged from the Navy in September 1975 after having been awarded a National Defense Services Medal, a Viet Nam Service Medal with Bronze Star and a Meritorious Unit Commendation. Although he enjoyed the adventure of travel that the Navy provided to him, he vowed afterward, to never go on a cruise vacation. He was pretty sure he had seen all the oceans he needed to. In 1978, he joined Litton Industries as a test analyst and transitioned to Northrop Grumman when Grumman merged with Litton. Randy retired in 2020 after working 42 years with the company. He made many lifelong friends while he was there and was an active member of the West Valley Northrop Grumman Golf Association. He also belonged to a company ski club and looked forward to their annual ski trips. He was a multi-skilled handyman, a helper in a crisis, a person you could count on no matter what. Anyone who knew Randy would probably not be surprised by the Navy saying he was “normally terse”. He was not one to “gush” or be overly demonstrative in showing affection to family or friends, except when it came to his grand-niece, Aria. He was butter in her hands. He doted on her, celebrated her milestones and she adored her Uncle Randy. He was the best babysitter ever! He kept his eyes on her endlessly and she never got a boo-boo when he was in charge. The family will miss him greatly, as our gatherings will never be the same. He was a lover of our familyjigsaw-puzzle-marathons that would keep him up until all hours of the night looking for just one more piece that fit. He was always the first to answer the call to the dinner table and the last to leave. He loved to eat and never gained an ounce. He loved music and had a huge vinyl collection, liked to read, was a Dallas Cowboys fan and every football season, participated in the football pool with his friends. After he retired, he renewed his passport, bought a new car, and made plans to travel and enjoy life. Unfortunately, Covid came along and he was unable to enjoy the retirement he envisioned prior to his passing. Randy will be buried at Veteran’s Cemetery in Riverside on Wednesday, September 29, 2021 at 11:15AM at which time there will be a short ceremony for family. A memorial for him will be held on Saturday, September 11, 2021 at 2pm for friends and family at the home of Sheila and Claude Ames. Invitations to follow

Randy Thomas Kerr, age 72, passed away on August 16, 2021 due to Stage 4 cancer, which was recently diagnosed in July, 2021. His decline was rapid and his sudden death surprised family and friends. Learning of the seriousness of his illness... View Obituary & Service Information

The family of Randy Thomas Kerr created this Life Tributes page to make it easy to share your memories.

Send flowers to the Kerr family.