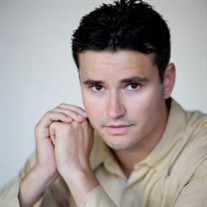 It is with inexpressible sadness and broken hearts that the family of Rareș Caledor Popa, age 40, announces his passing on Friday, October 22, 2021. Rareș was born in Satu Mare, Romania on April 3, 1981. Though Romania’s borders were closed under the communist regime into which he was born, he was granted permission to leave Romania with his sister to be reunited with their parents in France in early 1983 where he lived with his family until the age of three when they immigrated to the United States. Rareș spent most of his childhood in southern California and attended University High School in Irvine. He graduated from Antioch University in Santa Barbara and completed his education after obtaining his Master’s degree there in 2008. He moved to Virginia several years later for work prior to his return to California in the winter of 2019. Rareș was a beloved friend to many, and he made close friends everywhere he went. His charismatic and warm personality were very inviting, and his deeply caring nature kept him close to the hearts of all who knew him. Those who knew him well have shared that his purity of heart, gentle nature and sensitivity, good spirit, humor, generosity, unbounded curiosity, love of life and force of will to remain positive are unforgettable aspects of Rares’ unique nature. He had a remarkable gift to live life to the fullest and loved to have fun. He enjoyed professional automotive racing and would visit the track to participate in racing events. He also enjoyed being physically active and would often snow board, ride his electric unicycle, and play disc golf. His early life took him from Romania to France, England and the United States and his frequent travels took him far and wide in Canada, Mexico and throughout Europe. Rares left an indelible mark on all those who new him well and innumerable more with whom he crossed paths. Rareș was a true trailblazer, ahead of his time in many ways - a deep and innovative thinker and intelligent beyond expression. He challenged and pushed the limits and achieved any goal he set out for himself, spanning his various recreational areas of interest including in music, self driving vehicle technology and crypto currency. His deep love of sound led him to compose and create his own electronic and trance music. He was also highly technologically savvy and was able to “hack” the sensors and existing control systems in production cars to utilize these features to create his own self driving cars well before they were publicly available. He also educated those interested in modifying their own cars to become self-driving through a business entity he created in the summer of 2016 called The Ra Method. His interest in crypto currency inspired him to mine cryptocurrency himself. He quickly learned how energy inefficient mining was and created and implemented a more efficient mining method through immersion in liquid oil. Professionally, his work in the field of IT and cyber security kept him engaged for long hours. Rareș consistently pushed himself intellectually and physically beyond the limits of what seemed humanly possible and lived a life that was full of a spirit and curiosity most can only dream of. As his middle name “Caledor” implied, his life burned with a spirit that was indelible. Rareș was deeply loved by his family and is survived by his parents Georgette and Anton Popa, his sister Andra Popa, his former brother-in-law Hans Scheifele, his niece Seraphina Scheifele, his nephew Kenton Scheifele, his aunt Dorina Hauprich and his cousins Erwin Helmuth Hauprich and Antonela Hauprich-Nawabi. He will be missed immensely. May his memory be eternal.

The family of Rareș Caledor Popa created this Life Tributes page to make it easy to share your memories.

It is with inexpressible sadness and broken hearts that the family...

Send flowers to the Popa family.