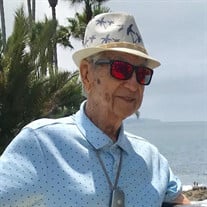 Raymond B. Alderete Sr. Passed away January 28, 2021, inches away from 100 years old. He passed away peacefully in his sleep lying next to his beloved wife Anna May. They both resided at Atria Senior Living in San Juan Capistrano. &#8226; Raymond... View Obituary & Service Information

The family of Raymond Alderete created this Life Tributes page to make it easy to share your memories.

Send flowers to the Alderete family.