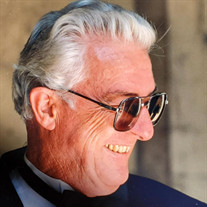 Richard Joseph Calef, born May 30, 1935, Lynn MA, passed away on Wednesday, May 12, 2021, in Simi Valley, California, he was 85. Richard was born to Edwin and Muriel Calef. He grew up with his sister Jeanne (passed, January 21, 2021), along with Aunts, Uncles and Cousins, in a 3 story Brownstone in Lynn, Massachusetts. Richard took a family trip to California in 1951, visiting local landmarks, including the Mission San Juan Capistrano. After his Army service as a Seminarian, April 1957 to February 1960, he made a permanent move to California, followed by Muriel and Leo Patykula, his mother and her husband. In 1965, Richard went on a blind date with his soon to be wife, Joyleen. Six months later, April 16th, 1966, they were married. They were married for nearly 47 years. During their marriage they opened their home to many foster children as well as raising their 4 children. Richard became a widower in February 2013. He is survived by his daughter Brenda Calef, Son-in-law Robert Cunning and their son Noah, daughter Diane Babcock, Son-in-law Brent Babcock and their sons Tripton and Reidley, and sons Brian and Todd Calef, Foster daughter Cheryl Quinn, Son-in-law Joe Pipersky and their sons Steven and Brandon, and Foster daughter Roanne Prince and her son Frankie. As well as several cousins in California, New Mexico and the Eastern Seaboard. Richard was a Jack-of-all-Trades. Before he married Joyleen, Richard was flipping houses in Los Angeles. After their marriage in 1966, they moved to Hawthorne, California, where he worked for the Carnation Company in Los Angeles. Us children remember this job fondly, as he would bring home ice cream and all sorts of treats! Years later, a family member suggested to Richard an opportunity to open his own business, and Bonanza Mobile Spray Wash was born. Richard worked hard washing mobile homes, driving from LA county to Orange County for many years. In 1978, Richard and Joyleen decided to move to Orange County, and found their forever home in Laguna Hills. Both our parents were devoted Catholics, and with the move to Laguna Hills, they were in search of a new church, and they chose the Mission San Juan Capistrano. In 1979, we became members of the Parish, and us 4 kids were enrolled at the Mission Parish School. Our dads first wood working project was to make desks for the school we were attending. We spent our first summer in our new home making 100’s of wooden desks. Richard’s desire to give did not stop there, our parents became Eucharistic Ministers and sung in the Choir. Eventually, the Mission hired Richard and he spent over 25 years as the Facilities Manager. Working at the Mission was not limited just to Richard; Joyleen, Todd, Brenda and Robert, and Diane all worked there as well. Richard enjoyed working with his hands. Our Hawthorne home was a single story when they bought it, and dad decided to build a second story on it, while his young family was living in the house. Throughout the years, Richard has created many wood working masterpieces, from personal projects for his home to family and friends’ homes. He also created many projects that are still standing today at the Mission San Juan Capistrano and the Mission Parish School. Richard was a very loving and caring man. He had a great sense of humor and loved to make people laugh. Dad loved to dress up and play the part from Santa Claus to the Tooth Fairy. One of his favorites was to don his “Irish Suit” comprised of all different shades of green and a goofy hat! He was also known for his unique tie assortment and his yellow tape measure suspenders. Richard also loved to eat. He would be the last person at the table still eating as the dishes were being washed and put away. We used to joke that he had a hollow leg that he was putting all the food he ate in. He always gave, rarely took and was thinking of others before himself. Richard will be greatly missed by us all. The service for our dad will be held on Friday, June 4, 2021, 10 a.m. at Saint Kilian Church 26872 Estanciero Drive, Mission Viejo, CA 92691, 949-586-4440, there will be a brief viewing starting at 9:25 a.m., prior to the mass. Followed by a reception at noon at McCormick Mortuary 25002 Moulton Parkway, Laguna Hills, CA 92637, 949-768-0933. On Saturday, June 5, 2021, 1:30 p.m., dad will be joined with mom at Holy Cross Cemetery 5835 W. Slauson Avenue, Culver City, CA 90230, 310-836-5500.

The family of Richard Joseph Calef created this Life Tributes page to make it easy to share your memories.

Send flowers to the Calef family.